In a massive embarrassment for Pakistan, Imran Ismail- the governor of Pakistan’s Sindh province referred to the occupied areas of Jammu and Kashmir as PoK.

In a massive embarrassment for Pakistan, Imran Ismail- the governor of Pakistan’s Sindh province referred to the occupied areas of Jammu and Kashmir as “Pakistan-occupied Kashmir” (PoK) on January 19.  Ismail wrote this on Twitter while posting an article with reference to Pakistan Prime Minister Imran Khan’s willingness to conduct a plebiscite or a referendum in PoK. Officially, Pakistan has never admitted to illegally occupying parts of J&K and calls it ‘Azad Kashmir’. After considerable outrage on social media in Pakistan, Ismail- who is also a senior leader of Khan’s PTI party deleted his tweet. 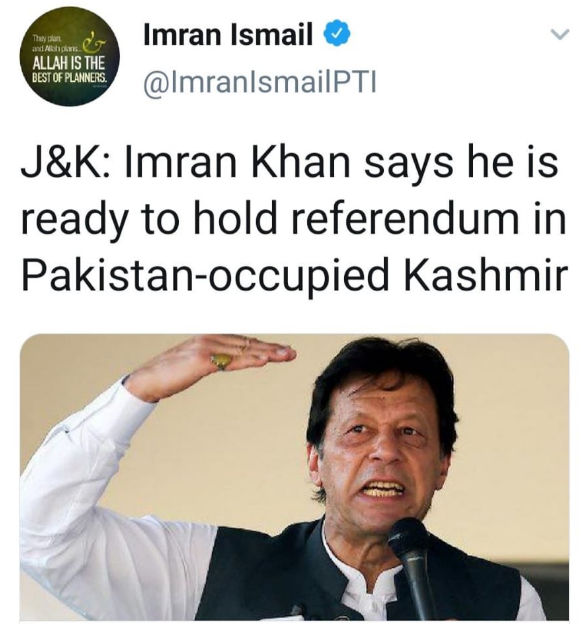 'Pakistan is ready for a referendum or a plebiscite'

Speaking with Ines Pohl, the Editor-in-Chief of Deutsche Welle in the previous week, Imran Khan stated that he wanted the people of Kashmir to have a say in their future. Moreover, he claimed that Pakistan was ready for a referendum or a plebiscite in PoK as well. Khan was responding to a question on giving a choice to the people of PoK

Read: SHOCKING: Pakistan Army Beheads One, Kill Another And Injures 3 Civilians Along LoC

Imran Khan stated, “Let the people of Kashmir decide what they want. Pakistan is ready for a referendum or a plebiscite. Let them decide whether they want to remain with Pakistan or to be independent.”

Pakistan's multiple reactions on PoK assume significance in the wake of COAS General Naravane addressing the annual news briefing of the Indian Army on January 11. He stated that the Parliament had passed a resolution declaring that the entire J&K including PoK belonged to India. He stressed that appropriate action to retrieve the occupied areas could be undertaken after receiving requisite orders.

The COAS remarked, "There is a parliamentary resolution that entire J&K is part of India. If Parliament wants it, then, that area (PoK) also should belong to us. When we get orders to that effect, we'll take appropriate action.” He added, "Everyone in Jammu and Kashmir, be it on LoC or hinterland, is doing a tremendous job. We have the full support of people. We are grateful to local police and administration who support us. They don't have a harsh word to say about the Army."