READ THIS | "I Am Not Worthy Of The Nobel Peace Prize": Pakistan PM Imran Khan Says What Everyone Knows, Proves Why

Pakistan Prime Minister Imran Khan has issued an absolutely stunning volte-face over his government laughably recommending him for a Nobel Peace Prize for his 'role' in 'reducing tensions' between India and Pakistan.

Taking to Twitter, Imran Khan has said what everyone knows, i.e. "I am not worthy of the Nobel Peace prize".

He then goes on to bolster his own point, by making provocative statements about Kashmir to which his continues to export terror and unleash military attacks targeting India's civilians:

I am not worthy of the Nobel Peace prize. The person worthy of this would be the one who solves the Kashmir dispute according to the wishes of the Kashmiri people and paves the way for peace & human development in the subcontinent.

Imran Khan's statement comes days after his own government adopted a resolution to demand a Nobel Peace prize for their Prime Minister:

The Nobel Peace prize demand came even as Pakistan reinforced its status as the world's biggest state-backer of terror, with former Pak foreign minister Khawaja Asif justifying terrorism and specifically, the Pulwama terror attack in the Pakistani Parliament.

Asif spoke about the Jaish-e-Mohammed-backed Pulwama bomber, calling the attack an 'act of revenge', saying it is a legitimate right and a birth-right, and shockingly going on to add, "we support them and we advocate them".

The statement by Asif was also not the only shocking admission by a Pakistani foreign minister, past or present, to be made to that effect. Current incumbent Shah Mehmood Qureshi while speaking to global media admitted that Jaish-e-Mohammed chief Masood Azhar is indeed in Pakistan, and then tied himself in knots explaining how Masood Azhar was currently unwell and unable to come out of his home.

Here is the Pak resolution for Imran Khan being a Nobel Peace Prize: 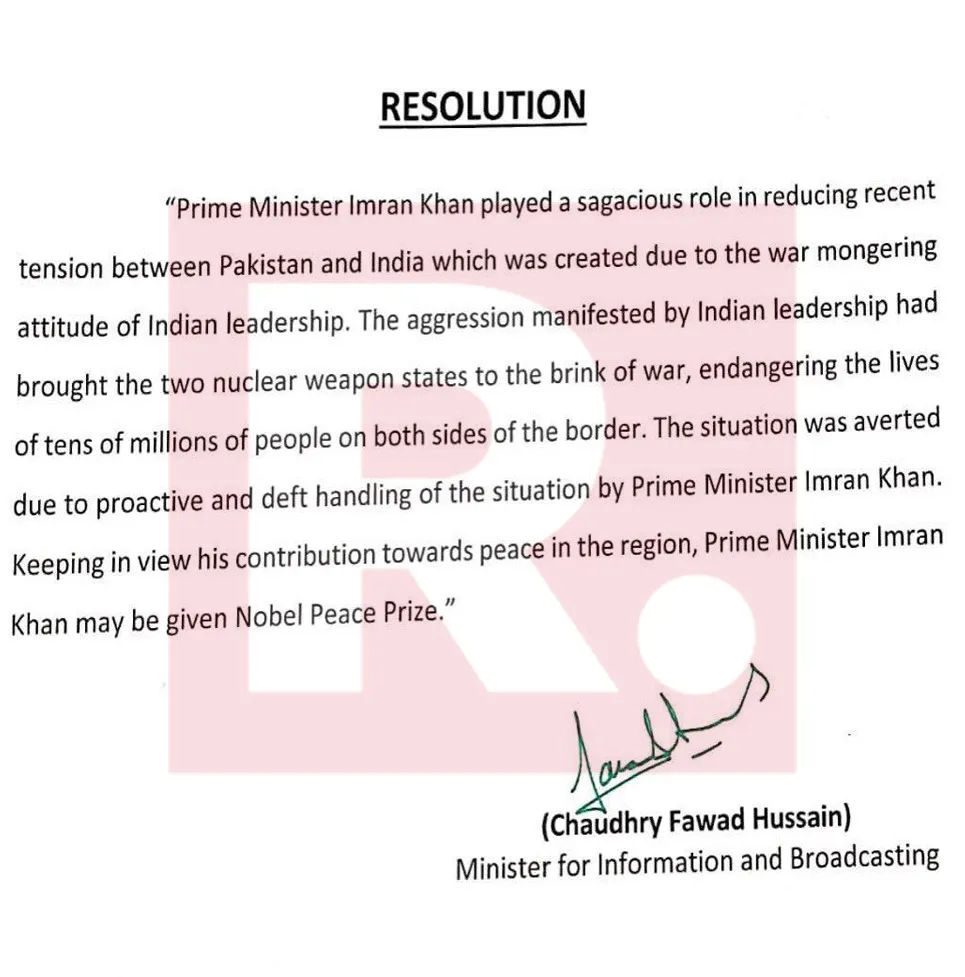 The demand for the Nobel Peace Prize had come against the backdrop of the Pakistan government trying to put a 'goodwill gesture' spin on the decision to release IAF Wing Commander Abhinandan to India, despite the truth being that Pak had little choice in the matter due to India's multi-dimensional and inexorable pressure demanding the release.