WHO Sounds Alarm On Pakistan; Warns Of Major Outbreaks Of Disease After Floods Wreak Havoc

The World Health Organization (WHO) warned about the risk of additional spread of malaria, dengue fever, as well as other water and vector-borne diseases 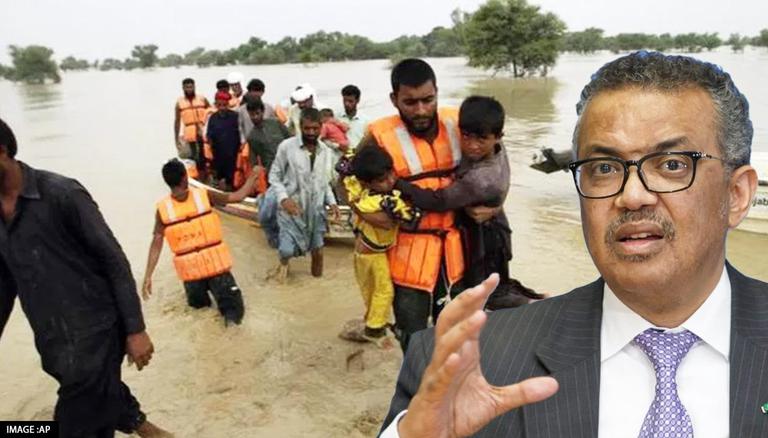 
As devastating floods have wreaked havoc in Pakistan, the World Health Organization (WHO) on Wednesday warned about the risk of additional spread of malaria, dengue fever, as well as other water and vector-borne illnesses, further noting that significant health concerns are developing in the nation. The WHO Director-General, Tedros Adhanom Ghebreyesus stated that the organisation has classified the condition of Pakistan as a ‘grade 3 emergency’ which is considered to be the highest degree of its internal grading system. This indicates that all three levels of the organisation—the national and regional offices, as well as its headquarters in Geneva—are participating in the response.

The deadly floods in Pakistan triggered by monsoon rainfall, have impacted over 33 million people and three-quarters of the country's districts. WHO even revealed citing national health officials that over 1,000 people have lost their lives and more than 1,500 people have been wounded. Further, over 1,61,000 individuals are currently in camps, as per a press release.

WHO is responding as districts in #Pakistan🇵🇰 continue to be affected by unprecedented levels of flooding.

The impact of the heavy monsoon ⛈️ rains is drastic, affecting 3⃣3⃣ million people in 116 districts across the country.

During his regular briefing from WHO headquarters, Tedros stated, “Floods in Pakistan, drought and famine in the Greater Horn of Africa, and more frequent and intense cyclones in the Pacific and Caribbean all point to the urgent need for action against the existential threat of climate change”, UN New reported.

In addition to this, due to the floods in Pakistan, nearly 900 medical institutions throughout the institution have been damaged, of which 180 are totally destroyed. According to UN News, millions of people in the nation now lack access to medical care and treatment.

Furthermore, a State of emergency has been proclaimed by the Pakistani government, and a $160 million United Nations appeal has been launched for the nation. To help with this condition, Tedros also made $10 million available from a WHO emergency fund.

Besides this, disease outbreaks such as acute watery Diarrhoea, dengue fever, malaria, polio, as well as COVID-19 have been exacerbated worse due to the crisis, especially in camps and areas where water and sanitation infrastructure has been compromised. Even before the torrential downpours and flooding, Pakistan had 4,531 instances of measles this year and 15 instances of wild poliovirus. In the impacted regions, a national polio campaign has been disrupted, the release read.

Dr. Palitha Mahipala, WHO Representative in Pakistan, asserted that WHO is collaborating with local health authorities to provide prompt and efficient assistance. Mahipala said that presently, their main priorities are to ensure quick access “to essential health services to the flood-affected population strengthen and expand disease surveillance, outbreak prevention and control, and ensure robust health cluster coordination,” as per a press release from WHO.

READ | Saddened by loss of lives due to severe floods in Pakistan: White House

The Regional Director for the Eastern Mediterranean, Dr. Ahmed Al-Mandhari even stressed that WHO has launched an emergency response to treat the injured, deliver life-saving resources to health institutions, support mobile health teams, and prevent the spread of infectious illnesses.

Meanwhile, the national response is being led by the Pakistani government, which is also setting up command centres and medical clinics in the provinces and districts. Along with coordinating air evacuation operations, the authorities are also holding health awareness seminars on COVID-19 and other infectious diseases including waterborne and vector-borne illnesses.

In order to prevent future spread, WHO is closely collaborating with the health ministry to strengthen monitoring for acute watery diarrhoea, cholera, and other infectious illnesses.