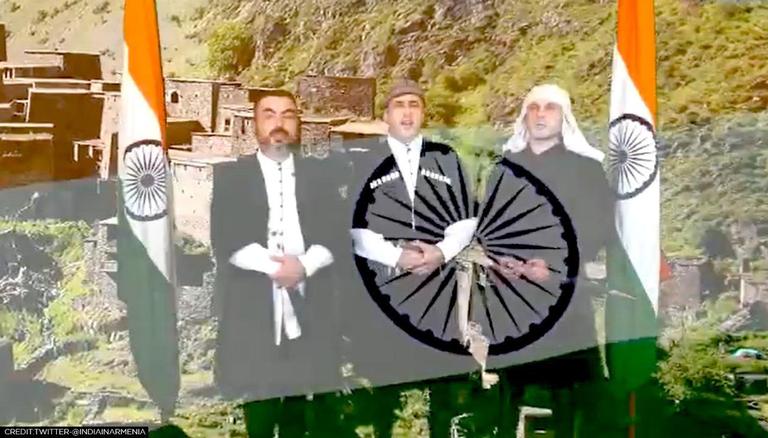 
On August 15 this year, India marks its 74th Independence Day. With patriotism in the air, the day is celebrated every year in order to remember its most significant historical victory and the freedom fighters who fought for the nation. The nation also celebrates and honours the contribution of the Indian Armed Forces, which work day and night for the safety of its people.

Amid the COVID-19 pandemic, however, citizens will be celebrating Independence Day from the home. Along with the Indian citizens, the day is also celebrated by other nations. Recently, Chveneburebi Music Group of Georgia also marked the day by singing the Indian National Anthem. Watch the video below.

The short video clip was shared on the official Twitter handle of India in Armenia & Georgia. In the video, Chveneburebi Music Group of Georgia is seen celebrating India’s 74th Independence Day. The singers can be seen singing the National Anthem of India, Jana Gana Mana and standing straight to pay the tribute. Sharing the video, the Embassy of India in Armenia wrote, "Celebrating '#AzadiKaAmritMahotsav' Chveneburebi Music Group of Georgia sang National Anthem of India. #MeraMaanMeraRashtragaan @MEAIndia @IndianDiplomacy @MFAgovge."

Chveneburebi Music Group was established in the year 2001 by Nugzar Kurtskhalia. The music group specialises in folk music. They have released popular albums such as Project Caucasus, AstroGeorgia, Transitional (Gardamavali), and On The Soul Edge, among others. The list of renowned songs also includes Vardis Shto, Love Song, Rachuli, Gadmoviare Mta-Bari, and Nena Nena, among others.

Independence Day celebrations around the world

As Independence Day is around the corner, the Indian diaspora in various other countries such as the UK, US, Europe, and others will be marking the day by hosting various events. Reportedly, an organisation representing the Indian diaspora in the United States will also be hoisting the biggest Tricolour at Times Square in New York on August 15 this year. According to the Federation of Indian Association (FIA), the 6 feet by 10 feet Tricolour that places on a 25 feet pole, will be unfurled by the Consul General of India, Randhir Jaiswal, in New York.