Video of a 91-year-old dancing after getting back home post her therapy sessions is doing rounds of the internet. The video has captured the hearts of netizens

Video of a 91-year-old woman dancing after getting back home post her therapy sessions is doing rounds of the internet. Julia Lewis who is a resident of Indiana, US was captured showing her dance moves in a video. The 22-second long clip which was posted by Golden Age Home Health Care on Facebook has garnered over one thousand likes.

In the video, Lewis can be seen letting go of her walker before bursting into Jailhouse Rock, much to the delight of the spectators. Describing her moves, she told international media that it was what she did when she was young. Media reports said that dancing had been always been a big part of her life and something she could not get off as a teen.

Read: 'Cheeni Kum', 'Shimla Mirch' And Other Films That Prove Age Is Just A Number For Love

Read: Neha Kakkar Says 'Love You Aadi' To Aditya Narayan As They Engage In A Sweet Banter

According to media reports, Lewis has been going through physical therapy and fortunately, she had made great strides in her recovery. Facility staff at the hospital said that Lewis was quite the dancer back in the day and she cut class more than anyone only to go dancing instead.

The video was quick to win the hearts of netizens who then showered their love and respect for the old lady in comments. Read it here: 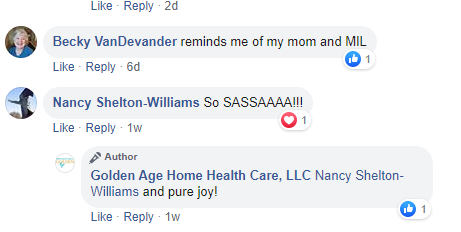 Meanwhile, another woman of the same age is winning the internet and grabbing eyeballs all across the world for her bold and colour pop dressing sense. The social media icon, who goes by the name of Baddie Winkle on Instagram has over 3.8 million followers. Also adding to the list of her followers are the American rapper Drake, singers Miley Cyrus and Rihanna.

Helen Ruth Elam, who is giving a tough competition to the youngsters often posts pictures of herself decked up in beautiful neon and vibrant attires. The fashionista has proved that age is just a number. Many of her followers are impressed by the tagline of her profile which reads, "Stealing Your Man Since 1928."