Located at 150 kilometres (93 miles) northeast of the capital (Kabul) in Afghanistan, Panjshir offensives by the resistance forces from 1980 to 1985 had overthrown the Soviet Army and Afghan mujahideen. This region in Afghanistan, dominant in the Tajik population, has long defied and toppled autocratic regimes to honour freedom of autonomy and instate the democratic will of the Afghan population. Panjshir’s guerrilla commander Ahmad Shah Massoud had launched a standoff in 1979 against the Soviet-led armed forces and rival militias impediment to the elected-Afghanistan central government. His Northern Alliance accounted for more than 30 % of Afghanistan's population at its peak.

But as Massoud led an armed uprising against the Taliban, he was assassinated by the Taliban-funded terror outfit Al-Qaida on September 9, 2001.

As the Taliban now gained a stronghold on Afghanistan seizing control of the Presidential palace after the now exiled Afghan leader Ashraf Ghani escaped, Ahmad Massoud, 32-year-old son of the ‘Lion of Panjshir’ has returned to Panjshir as his defence base in coordination with former Defence Minister General Bismillah Mohammadi and the ex-Vice President of Afghanistan Amrullah Saleh who has taken in charge of the country. Panjshir is now reportedly entirely surrounded by the Taliban.

It is not over - we resist

Thousands are joining the National Resistance Front, led by @AhmadMassoud01 in #Panjshir province, the last bastion of democracy and freedom in #Afghanistan. pic.twitter.com/eRfQukyqUj

The Anti-Taliban forces are building a guerrilla movement to defeat the hardline Islamic fundamentalist group and deposed VP Saleh working with Massoud's resistance group told the press, “I will never, ever and under no circumstances bow to the Taliban terrorists.” The son of the ‘Lion of Panjshir’ was filmed at northern HKIA on a late afternoon, entering a Mi-17 that reportedly transported them to the Panjshir Valley. Footages emerged that showed Afghan soldiers and Anti-Taliban commanders coming together in the province.

"The Lion Tames the Bear in Afghanistan" a book describes Shah Massoud's defense in the strategic Afghanistan province.

Anti-Taliban fighters are planning to launch an armed conflict from the strategic Hindu Kush mountains, which, as history has documented, never fell into the hands of the Taliban during the civil war of the 1990s. Earlier yesterday, the resistance fighters recaptured three key districts of Banu, Pol-e-Hesar, and De Salah in Afghanistan’s Baghlan province from the Taliban control, causing massive casualties on the Talibani side. As many as 60 Taliban terrorists were dead or injured in the fierce battle.

🇦🇫 At the call of Ahmad #Massoud, Afghan soldiers begin to arrive in #Panjshir, who were able to escape from the Taliban.#Afghanistan pic.twitter.com/aADoyy6Uvk

“I will never betray the soul and legacy of my hero Ahmad Shah Mas[s]oud, the commander, the legend and the guide," Saleh wrote on Twitter as he led a resistance movement from the Panjshir valley that has played a decisive role in Afghanistan's military operations.

During the deployment of the NATO-backed government from 2001 to 2021, before the terror funding Taliban forces seized power, Panjshir province had financed the resistance via mining of emeralds. As Saleh and Afghan Acting Minister of Defense Ahmed Massoud embolden retaliation against fundamentalist Taliban, they vow that their fighters would not disappoint millions of Afghans who will “never be under one ceiling with Taliban. NEVER.”

“No matter what happens, my mujahideen fighters and I will defend Panjshir as the last bastion of Afghan freedom. Our morale is intact. We know from experience what awaits us,” Ahmed Massoud’s recent opinion piece stated.

Panjshir’s terrain has served as an ideal site for combat operations and defensive mountain warfare as the former Afghan soldiers had conducted deployment in this region to plan military strategies. The province is landlocked and unless the Talibani fighters appease the local Afghan population, the region is utterly inaccessible. The majority of the Taliban are Pashtuns, while the Panjshir inhabitants are the Tajik ethnic group. Afghanistan’s United Front, also known as the Northern Alliance has succeeded in controlling the region for several decades when the civil war broke out in Afghanistan, ultimately prompting the withdrawal of the Soviet Union in 1989. United Front’s idea of a regime that is based on moderate Islam is focused mainly on the democratic fabric and institutions with equal rights for Afghan women. 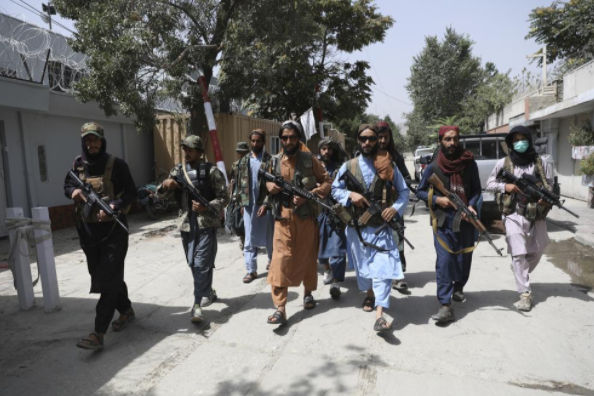 [Taliban fighters patrol in the Wazir Akbar Khan neighborhood in the city of Kabul. AP Photo]

Massoud who now commands the armed militia against the Taliban in the valley was joined by the former members of the country's special forces and soldiers from the Afghan army who he said were "disgusted by the surrender of their commanders.” The latter, who has now united a string force against the Taliban terrorists asked the United States and countries in the world to supply arms and ammunition to his mujahideen fighters, who, he stated in an op-ed, were “prepared to once again take on the Taliban.”  Russian Foreign Minister Sergei Lavrov told a presser in Moscow following a meeting with his Libyan counterpart that the Taliban does not control the whole territory of Afghanistan as he acknowledged the resistance movement in Panjshir.

"There are reports of the situation in the Panjshir Valley where the resistance of Afghanistan's Vice President Saleh and Ahmad Massoud is concentrated," Russian Foreign Minister Sergei Lavrov told state presser.