A day after another explosion rocked Afghanistan's capital city on Sunday, several airstrikes were reported around the Kabul Airport. 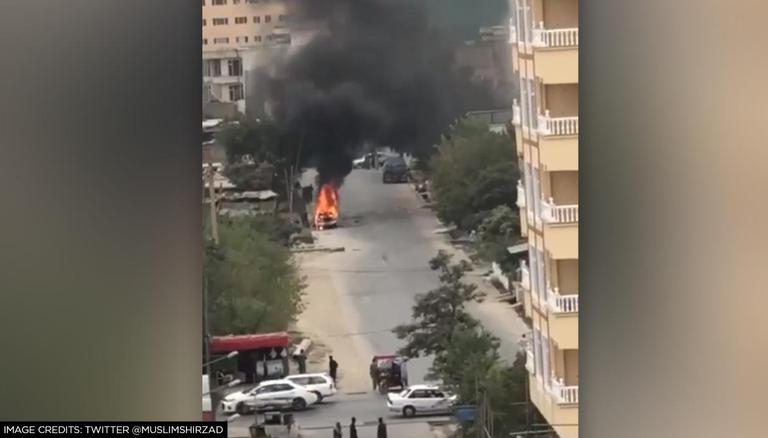 
A day after another explosion rocked Afghanistan's capital city on Sunday, several rockets were heard flying over Kabul. Reports initially stated that the targets remained unclear. However, local sources later reported that the rockets were fired from a vehicle at Aspha Square near the airport. The rocket attacks were repelled by Kabul International Airport's defense system.

Third Footage- Rockets were fired through this vehicle toward Kabul airport pic.twitter.com/ACCe7IFANj

Earlier on Sunday, a massive explosion hit Kabul, days after the twin suicide bombings near the Hamid Karzai International Airport. Reports stated that the explosion was a result of a rocket attack near  a neighborhood northwest of Kabul's international airport. In addition, it was reported that the rocket struck a residential house in the Gulai area of ​​Khajeh Baghra, in the 11th security district.

After the attack, Russia claimed that six people died in the drone attack that was carried by the United States to target suicide bombers who were moving towards the Kabul airport as evacuations are still underway. The United States also confirmed the attack which they say was targeted towards suspected Islamic State - Khorasan terrorists in Kabul.

The Sunday attack came days after the twin suicide blasts that took place at the Kabul airport on August 26, killing at least 169 Afghans and 13 US service members who were involved in the evacuation operations at Kabul's Hamid Karzai Airport. In retaliation, the US military struck back against the ISIS-K and conducted drone strikes in the aftermath of the devastating blasts.

After the first attack where twin suicide blasts claimed the lives of Afghans and American service personnel, US President Joe Biden had vowed to avenge the attack. Similarly, on Saturday, Joe Biden asserted that the US airstrikes against the Islamic extremist group will continue.

“This strike was not the last,” said Biden.

“We will continue to hunt down any person involved in that heinous attack and make them pay,” Biden added