WATCH | Afghanistan: Taliban Has Breakfast At Governor House After Taking Over Jalalabad

Forcing their way into the Governor's House, several Taliban militants were seen having breakfast after capturing Afghanistan's Nangarhar province. 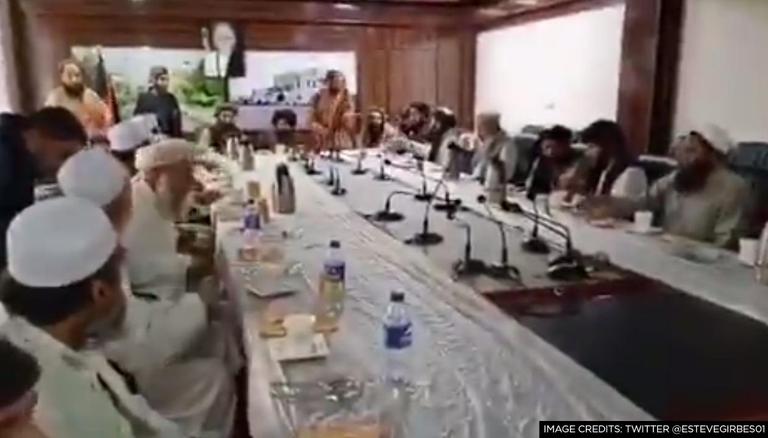 
The Taliban on Sunday morning captured Jalalabad, the capital of Afghanistan's Nangarhar province. The seize has cut off Afghanistan's capital Kabul to the east, mounting additional pressure on the Ashraf Ghani government. After the major gain, the militant group overran the province and stormed into the Governor's House to establish their official claim on the region.

Forcing their way into the Governor's House, several Taliban militants were seen having breakfast. In a video shared by Iván Esteve on Twitter, at least 20-25 Taliban insurgents can be seen seated on the massive table, breaking bread after taking over Jalalabad.

The #Taliban are having breakfast for the first time at the Governor's House after conquering #Nangarhar and #Jalalabad provinces.

An image that shows the great failure of the withdrawal of the troops. pic.twitter.com/sFuAG8Bh4k

Taliban closes in on Kabul

The fall of Mazar-e-Sharif - a heavily defended city on Sunday morning has sent the Afghanistan crisis spinning out of control. With control over Mazar-e-Sharif, the Taliban has confined the Ashraf Ghani-led government to the center and east. The province was taken over by the insurgents after the national army surrendered, which prompted pro-government militias and other forces to lose morale and give up, as per Balkh lawmaker Abas Ebrahimzada. It is worth mentioning that the Balkh province was also backed by two powerful former war loads- Abdul Rashid Dostum and Ata Mohammad Noor- both of whom failed to protect the land and fled.

Two days ago, the Taliban took over Afghanistan's second-largest city- Kandahar which was followed by the fall of several crucial provincial capitals such as Herat and Lashkar Gah. With this, the Taliban now control 24 of 34 provinces, which suggests that the fall of Kabul may be quicker than what was anticipated.

Meanwhile, Afghan President Ashraf Ghani has refused to cower down to the Taliban and has vowed to remobilise the security forces to fight the insurgents.

In a press statement on Saturday Ashraf Ghani said, "I strive to ensure that this imposed war does not further kill the people of Afghanistan and destroy your achievements in the past 20 years".

Sources have reported that the US has stopped the Taliban from overrunning Kabul for the time being. US President Joe Biden has ordered the deployment of 5,000 troops to Afghanistan to ensure an orderly and safe drawdown of American personnel from the war-torn country on priority.

WE RECOMMEND
Afghanistan: Taliban captures Mazar-e-Sharif, reaches Kabul's outskirts in major offensive
Who are the Taliban? How did it start ruling Afghanistan? When did US troops enter?
Taliban warns India against military presence in Afghanistan, discusses links with Pak
China prepared to recognize Taliban-rule in Afghanistan if Kabul falls: Report
Taliban tightens grip on Afghanistan, captures capital of Ghor province