As the Taliban inches closer to establishing full control over Afghanistan, multiple protests slamming Pakistan for its role in the debacle have broken out. 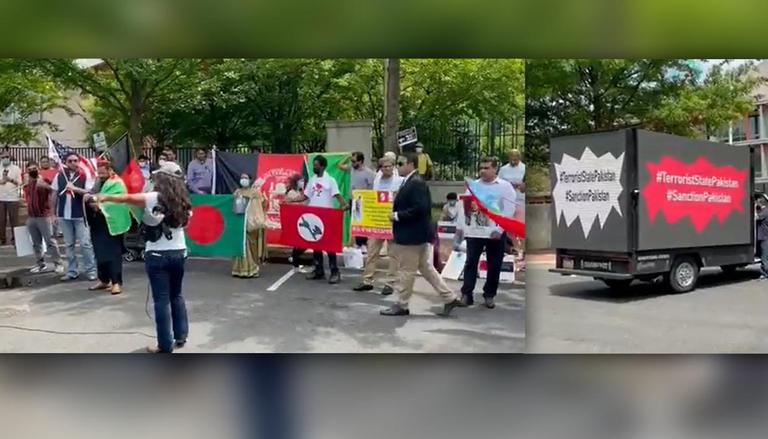 
As the Taliban inches closer to establishing full control over Afghanistan, multiple protests slamming Pakistan for its role in the debacle have broken out across the world. On Sunday, protesters took to streets in at least five countries including the USA, the UK, Canada, Australia, and Austria, to raise their voice against Taliban insurgents and their brutal offensive in the southcentral Asian country. The demonstrators also called out Islamabad for conducting a proxy war in Afghanistan and demanded sanctions be placed on Pakistan for its alleged duplicity.

Demonstrations were also held at Brandenburg Gate in Germany, where almost 300 people had gathered. Meanwhile, Afghans residing in the south Australian city of Adelaide also called for an end to the gruesome violence. Denouncing Islamabad for interfering in Afghanistan’s internal affairs, they called for hard sanctions against Islamabad.

In Washington DC, Afghan-Americans gathered outside the Pakistan Embassy to raise their concern against Islamabad sponsored terrorism. Raising slogans, they hoped that the Biden administration slaps austere sanctions on Pakistan for engaging in a shadow war in Afghanistan.

"A protest by Afghans, Balochs, Pashtuns and Sindhi communities was joined by communities from Pakistan occupied Kashmir and Bangladesh in front of the Pakistani Embassy in Washington DC. All demanded in 1 voice #SanctionPakistan #TerroristStatePakistan," tweeted South Asian Minorities Collective.

READ | As Taliban takes over Afghan, French ambassador shares video of leaving Kabul with others

The brave American Pashtun Shakella Mujadedi exposing Pakistan’s ugly role in Afghanistan & its promotion of global terrorism.”Every single act of terrorism in the US has a Pakistani name on it.Let’s join together,”Shakella urged Pashtuns in front of the PK embassy in DC Saturday pic.twitter.com/xh6yAJXobu

A protest by #Afghan #Baloch #Pashtun #Sindhi communities was joined by communities from #Pakistan occupied #Kashmir and #Bangladesh in front of the #Pakistani Embassy in #WashingtonDC.
All demanded in 1 voice#SanctionPakistan #TerroristStatePakistan@nytimes @washingtonpost pic.twitter.com/OlumWLsgX8

Incumbent Afghan President Ashraf Ghani has made his first statement after fleeing Kabul on Sunday following a Taliban blitz. Defending his stance to leave his native land, Ghani said that he had a “hard choice” of either leaving the country or allowing the Talibani insurgents to destroy Kabul, a city with a population of nearly six million people.

“The Taliban have made it to remove me. They are here to attack all Kabul and the people of Kabul. In order to avoid the bleeding flood, I thought it was best to get out,” he wrote.

The former Afghan President asserted that it was the Sunni Pashtun group that was now responsible for safeguarding the countrymen’s “honour, wealth and self-esteem”.

“Never in history has dry power given legitimacy to anyone and won't give it to them,” he said, asserting that the Taliban will have to prove themselves worthy of the residents. Speculating further, the Afghan leader said that the Taliban will now face a “new historical test: either they will protect the name and honour of Afghanistan or they will prioritize other places and networks”.