The new weather data analysis has revealed that the summers in Australia have become twice as long as the winters amid the escalating temperatures in country.

The new weather data analysis has revealed that the summers in Australia have become twice as long as the winters amid the escalating temperatures caused by climate change. Australia Institute has found out that summer across most parts of the country over the span of 20 years was about a month longer than in the mid-20th century, while on the other hand, the winters have become shorter. Between 2014 and 2018, the summers were found to be about 50 per cent longer but the new findings have followed Australia's warmest and driest year on record.

The Australia Insitute's Richie Merzian has said that the recent findings are not a projection of what might be witnessed in the future, instead, “it is happening right now”. The country also witnessed one of the most devastating bushfire seasons which killed at least 33 people along with one billion native animals. However, scientists have declared that the climate change was not the direct cause of bushfires, but they had long warned that a hotter and drier climate would contribute to the country's bushfires becoming more frequent and intense.

“Our findings are not a projection of what we may see in the future. It's happening right now. Summers have grown longer in recent years & winters shorter," said Richie Merzian, climate & energy program director at @TheAusInstitute #auspol

Key findings of the research

According to the official website of Australia Insitute, the key findings of the study stated that in the two decades from 1999-2018 when compared to the mid-20th century benchmark, the winter temperatures were only experienced for 23 days which is less than the benchmark. However, the summers were experienced for a full 31 days longer than the benchmark. It is in the most recent years, which has witnessed the trend in continuation with summers being twice as long as winters. 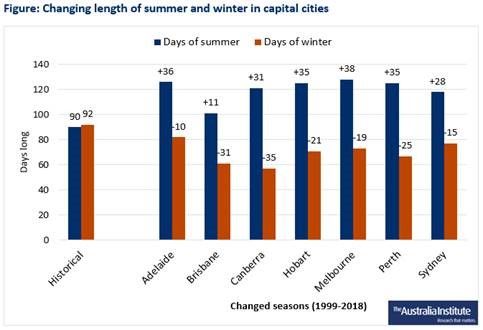 Some regional areas of the island nations like Port Macquarie NSW are experiencing even more dramatic changes to the length of seasons and are now witnessing seven more weeks of Summer temperatures as compared to the 1950s and '60s.

“Temperatures which were considered a regular three month Summer in the 1950s, now span from early to mid-November all the way to mid-March,” said Merzian. “Following the hottest Summer on record, it commonplace to hear older Australians claim Summers aren’t what they use do be. And they are right.”

Furthermore, the study also suggested that the extended summers will have significant impacts on Australia's tourism, construction, and mining sectors but also the normal life of the Australians. The prolonged increase in temperature can damage the crops and exhaust livestock.

According to official website, Merzian said, “The Australian Government’s current emission reduction targets are aligned with 3 to 4 degrees of warming, which leaves young Australians facing ever-lengthening Summers with significant consequences.”