Bangladesh Navy Admiral M Shaheen Iqbal on Monday laid a wreath at the National War Memorial in New Delhi during his ongoing visit to India. 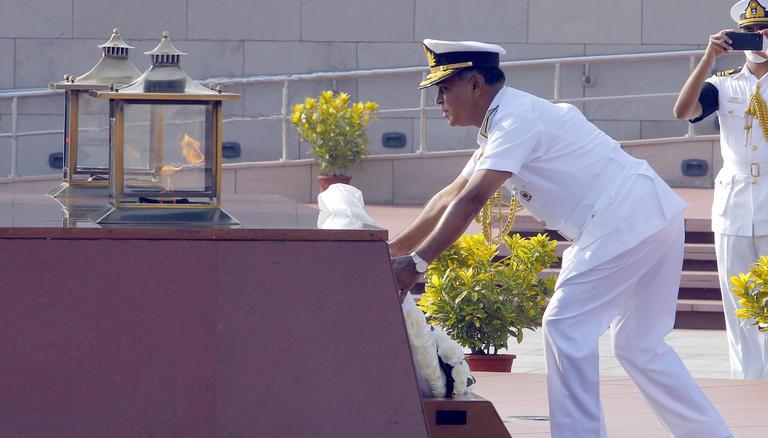 
Bangladesh Navy Admiral M Shaheen Iqbal, who is on a six-day visit to India, laid a wreath at the National War Memorial in New Delhi on Monday. According to the statement released by the Ministry of Defence, Admiral Iqbal will interact with the Chief of Naval Staff, in addition to the Chief of Defence Staff and other high ranking Government officials. During the bilateral interactions, issues related to joint cooperative efforts like Coordinated Patrol along International Maritime Boundary Line and bilateral exercise BONGOSAGAR will be discussed. It also said that the conduct of naval training and reciprocal visits of delegations would also be discussed during the visit. Raed the official tweet of the Indian Navy here:

Subsequently, Admiral Iqbal is scheduled to visit Mumbai where he will meet VAdm R Hari Kumar, Flag Officer Commanding-in-Chief, Western Naval Command and visit Flagship of Western Naval Command. After completing the Mumbai visit, the Admiral would proceed to Defence Services Staff College, Wellington to witness training activities and interact with Commandant, DSSC, added the statement. "India and Bangladesh share bonds of history, language, culture and multitudes of other commonalities. The excellent bilateral ties reflect an all-encompassing partnership based on sovereignty, equality, trust and understanding, that goes beyond strategic ties. India and Bangladesh are jointly celebrating Golden Jubilee Celebrations of Victory in Bangladesh Liberation War and 1971 War this year," read the statement released on October 25.

"A host of joint activities have been conducted which include reciprocal ship visits by both Navies and participation in Republic Day Parade 2021 at New Delhi by Bangladesh Armed Forces Contingent and gifting of WAR memorabilia. During the last quarter of 2021, the conduct of Talks by Bangladesh War Veterans at Naval War College & Indian Naval Academy and participation of Indian Armed Forces contingent & Band in ‘Victory Day Celebrations’ in Bangladesh are planned," the Ministry of Defence said on Monday.

Recently, US Chief of Naval Operations lays a wreath at National War Memorial

Recently, US Chief of Naval Operations Admiral Michael Gilday visited India in the second week of October. He also laid the wreath at the National War Memorial in the national capital. During his visit, he lauded India's record of long and distinguished record of contributing to global security. Also, the US Chief of Naval Operations visited the Indian Navy's Western Naval Command at Mumbai and Eastern Naval Command at Visakhapatnam wherein he would interact with the respective Commanders-in-Chief.