As the US scrambled to pull out its final men from Afghanistan, Americans and US war veterans took to social media to criticize the Biden administration. 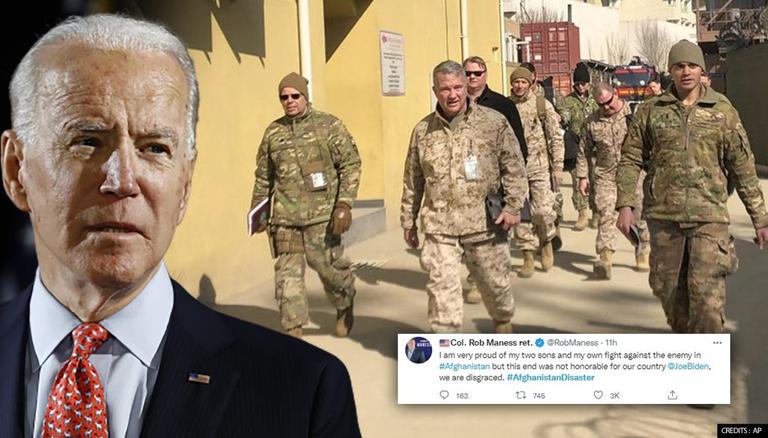 
The United States on Monday completed its military withdrawal from Afghanistan putting an end to America's longest war. However, the evacuation of the US troops and citizens, which has been touted as the largest airlift in US history, has come under severe criticism for being a 'chaotic' failure. As the US scrambled to pull out its final men from Afghanistan by August 31, Americans and US war veterans took to social media to criticize the Biden administration's evacuation plan.

War veterans and netizens trended the hashtag 'Afghanistan Disaster', and hit out at the US President for leaving behind citizens. According to details shared by Retired US Army SFC Samuel Williams, at least 90 retired flag officers have signed a letter calling out top military leadership in the US over the dangerous withdrawal and demanding their resignation. The war veterans have alleged that the disaster and emboldened countries like China, Russia and Pakistan to take advantage of the crisis. Moreover, they have also come down heavily on the dismissal of US Marine  Lt. Col. Stuart Scheller who had demanded that the senior officers and leaders take 'accountability' for the loss of 13 US servicemen in the Kabul bombings.

I am very proud of my two sons and my own fight against the enemy in #Afghanistan but this end was not honorable for our country @JoeBiden, we are disgraced. #AfghanistanDisaster

#AfghanistanDisaster is all Biden's fault. He left Americans behind because of piss poor evacution plan. We need to get our people home now! Every American should be screaming for Biden to resign.

The President must be impeached @JoeBiden, @SecDef, @thejointstaff
Mark Milley, @SecBlinken
Everyone of these people are responsible for the #AfghanistanDisaster and need to resign now!
90 Flag Officers have called for this as well as 1000s of Veterans. pic.twitter.com/j8JSgdgy0j

You broke the golden American rule: You left Americans behind.

Did he just say Afghanistan now has access to over $84billion worth of military equipment left behind by the US - which also mean Afghanistan has more Black Hawk helicopters that 85% of the world?

So the generals who disgraced their country fire and expel the one Lt. Col. brave enough to call them out for their lies and incompetence. What a fitting metaphor for a dysfunctional military command under a dysfunctional commander-in-chief #StuartScheller #AfghanistanDisaster

Earlier today, US President Joe Biden issued his first statement after the completion of the evacuation operations in Afghanistan and revealed that the US had evacuated over 120,000 US citizens and Afghan allies in the last 17 days. The President stated that he had directed the Secretary of State to lead the continued coordination with our international partners to ensure safe passage for any Americans, Afghan partners, and foreign nationals who want to leave Afghanistan.

The past 17 days have seen our troops execute the largest airlift in US history. They have done it with unmatched courage, professionalism, and resolve. Now, our 20-year military presence in Afghanistan has ended.