'Biggest Destroyer Of Peace': China Lashes Out After US Warship Sails Near South China Sea

China has deployed fighter jets and lashed out at United States, calling it “destroyer of peace” after a frontline American warship sailed past a reef. 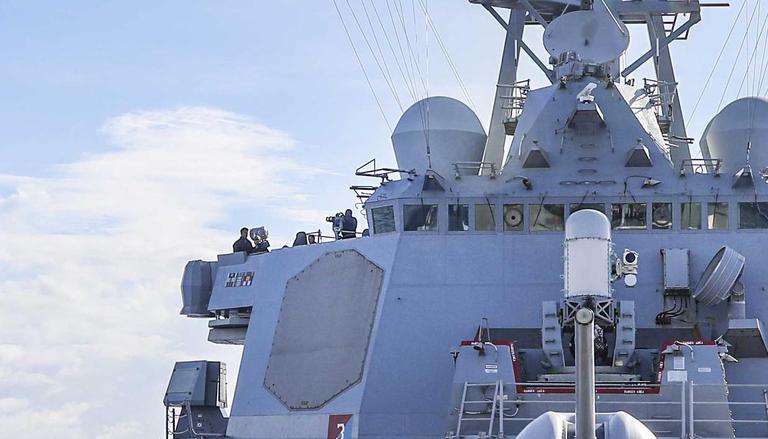 
China has deployed fighter jets and lashed out at the US, calling it the “biggest destroyer of peace” after a frontline American warship sailed past a reef in the contested South China Sea. On Wednesday, 8 September 2021, US Navy’s Destroyer USS Benfold sailed past the Mischief Reef, located close to the Spratly Islands, irking Beijing which claims sovereignty over almost the whole of the South China Sea. Notably, China is not the only one claiming rights over parts of the 3.5 million square kilometres wide sea, other players include The Philippines, Vietnam, Malaysia, and Brunei.

In a statement, Lt Mark Langford, deputy public affairs officer of US 7th Fleet said, “On September 8, USS Benfold (DDG 65) asserted navigational rights and freedoms in the Spratly Islands, consistent with international law. This FONOP upheld the rights, freedoms, and lawful uses of the sea. USS Benfold demonstrated that Mischief Reef, a low-tide elevation in its natural state, is not entitled to a territorial sea under international law,”

Furthermore, he asserted that the military ship was engaged in ‘normal operations’ within 12 nautical miles of the Mischief Reef. “These missions are rule-of-law based and demonstrate our commitment to upholding the rights, freedoms, and lawful uses of the sea and airspace guaranteed to all nations,” he said adding that “ freedom of navigation operations” in the South China Sea is a part of routine exercises of the US Navy.

However, the Chinese Navy was quick to respond to the sighting. In a statement, China’s People’s Liberation Army’s (PLA) southern theatre command asserted that the US operation was conducted sans permission. Announcing that it will remain on high alert, PLA said that facts have repeatedly proved that the US is an out-and-out “South China Sea security risk maker” and the “biggest destroyer” of peace and stability in the south China Sea.

Earlier, the Indian Defence Ministry announced that it will send a task force of four frigates on two months deployment in the South China Sea. Amidst an increasing shift in the balance of power in the Indo-pacific region, India has announced the deployment of warships to mark its military presence in the region.

WE RECOMMEND
US wants to source 40% of its power demand from solar energy by 2035, says DOE report
US thanks India & allies for 'generous offer' to help relocating citizens from Afghanistan
United States admits over 5,000 people still waiting to be evacuated from Kabul Airport
US shows apprehensions over track records, affiliations of some Taliban cabinet members
Antony Blinken says Taliban must 'earn legitimacy' to be recognised globally