Canada: Over 1,000 People Evacuated As Wildfire Rages Amid Record-breaking Heatwave

About 1,000 people were evacuated from their homes as wildfires have already burned 90% of Canadian village with country recording the highest ever temperature. 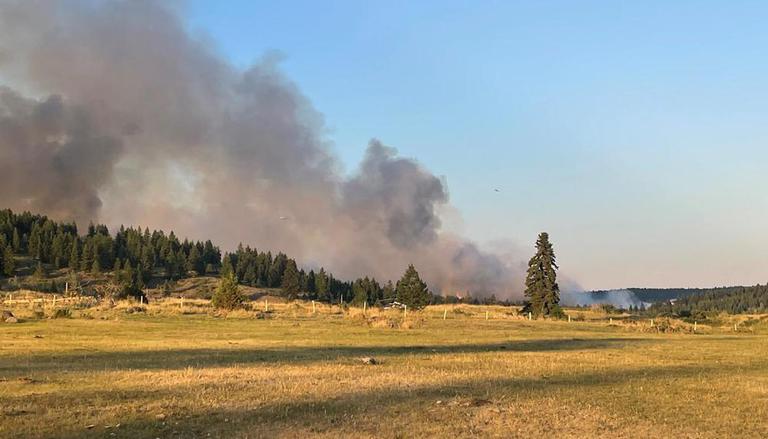 
As wildfires have already burned 90% of the Canadian village with the country recording the highest ever temperature, about 1,000 people were evacuated from their homes. At least 62 new fires have been recorded in the past 24 hours in British Columbia, said Premier John Horgan in a press conference. Mayor of Lytton, Jan Polderman told BBC that he had been “lucky to get out with my own life” and added that “There was fire everywhere.” According to him, “There won’t be very much left of Lytton.” Meanwhile, Horgan also flagged the “extreme” fire risk “in almost every part of British Columbia.”

We cannot stress enough how extreme the fire risk is in BC right now. Under current conditions, fires can quickly overwhelm our firefighting resources.

One of the best things right now for all of us to thank firefighters is to do everything we can to prevent causing any new ones https://t.co/j8SaUDgwku

Polderman had previously reportedly ordered the evacuation as the blazes had raged through the village in just a matter of 15 minutes. As per reports, British Columbia’s province had recorded Canada’s highest temperature of 49.6C or 121.3F. On Thursday, British Columbia’s public safety minister Mike Farnworth had said that most homes and buildings in the province had been destroyed and some residents were even missing.

Meanwhile, the British Columbia Wildfire Service said that the wildfire in Lytton was raging out of control over an area spanning roughly 80 square kilometres or 30 square miles. Meanwhile, several other fires were burning in the region as a heatwave roasted western Canada. In emails, Lytton city council member Lilliane Graie said on behalf of Polderman said on Thursday that the fire had devastated the town which is a village about 153 kilometres northwest of Vancouver.

“Our people are scattered north and south and we are trying to establish who is where,” she wrote.

As per reports, the 250 residents of the village were evacuated on Wednesday evening just a day after Lytton recorded the highest temperature in the country. Subsequently, the evacuation order was extended Wednesday night to residents of nearly 100 properties north of the village. In the wake of the situation, Canadian Defence Minister Harjit Sajjan wrote on Twitter, “The last 24 hours have been devastating for Lytton residents” noting that the Canadian armed forces “are ready to support residents as we move forward in the next steps."

READ | Is Canada Day a holiday in the country? See details about the day and holiday

I have been in contact with Minister @mikefarnworthbc and Minister @BillBlair. We will ensure support for the families & residents of Lytton is at the ready including from the @CanadianForces. You’re not alone, you have an entire province and 🇨🇦 beside you.

On July 1, Canadian Prime Minister Justin Trudeau also spoke with British Columbia Premier John Horgan. As per the official readout from the office, Trudeau, “assured Premier Horgan of the Government of Canada’s support for the people of Lytton and all those affected by the fires. He noted that Minister of National Defence Harjit Sajjan and Minister of Public Safety and Emergency Preparedness Bill Blair are working with provincial ministers to ensure that all federal resources necessary are available to British Columbia.” On July 2, Canadian PM will chair a meeting of the  Incident Response Group to discuss the extreme weather-related conditions in British Columbia and the wildfire situation throughout Western Canada.

READ | What is Canada Day 2021? Know the history, significance and more about this day

I spoke with @JJHorgan about the wildfires in Lytton and across BC. @BillBlair and @HarjitSajjan are working with their counterparts - and tomorrow, the Incident Response Group will go over the situation. We’re ready to assist in any way we can. More here: https://t.co/axu844VpJt

WE RECOMMEND
Forward Ayo Akinola switches to Canada from United States
Pope to meet with Canada indigenous amid demands for apology
What is a heat dome? Canada's extreme weather explained as heatwave shatters records
Happy Canada Day 2021: Here's why it is celebrated on July 1
Canada: Video of 'desi street fight' outside mall goes viral on social media | WATCH