Canada: Protest staged Against University Of Toronto Over Anti-Hindu Conference

The Indian community in Toronto conducted a protest outside the University, urging the admin to revoke the university's support for the anti-Hindu conference. 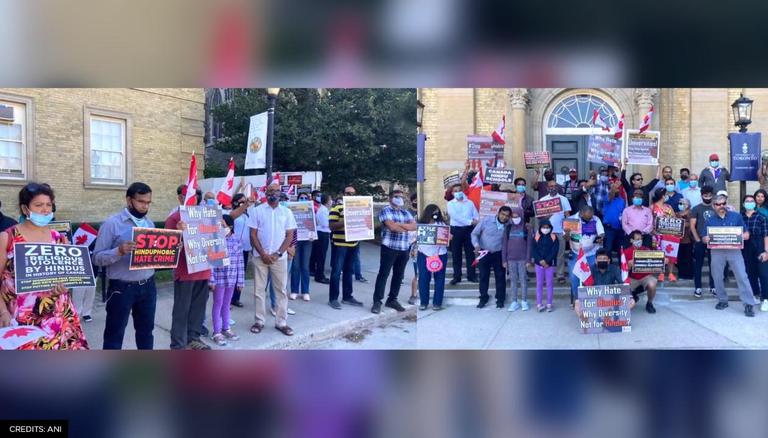 
The Indian community on Thursday (local time) in Toronto, conducted a protest outside the University of Toronto, urging the administration to revoke the university's support for the anti-Hindu conference-- "Dismantling Global Hindutva." Several Hindu organisations participated in the rally and voiced their concerns.

A day before the conference, Hindus throughout Canada expressed their dissatisfaction with the University of Toronto's support of the "anti-Hindu conference." The protestors issued a warning to the administration, stating that if any threat is made against Hindu students and staff, the university will be found responsible.

"We are hoping that the good sense will prevail with the university authorities. Professors do nothing. They don't teach, they just misused the funds of the university. They are using Canada, these academic institutions to create hatred towards Hindus, and we believe the university administration will stand up," said a protester. "I hope good sense will prevail. The administration should not sponsor such conferences as they said they are not sponsoring but they haven't done anything to stop the conference," the protestor added.

Another protester said, "Our demand is very simple. We do not want our universities to participate and sponsor this anti-Hindu conference. Let us also live our way, and we are peace-loving people. We believe in harmony, and we don't cause any trouble," said the protester.

The University of Toronto is meant to be a place where peace and love are preached. They should concentrate on providing high-quality education rather than engaging in contentious politics. They should not be taken away by special interests seeking to split the world, another protestor added.

Last week, a large number of Indian diaspora residents gathered in Vancouver to protest New Democratic Party (NDP) leader and MP Jagmeet Singh's silence on the attack on Canada's Hindu minority. This protest takes place as Canada prepares for the national elections on Monday, September 20. A group of people gathered to express their displeasure with Jagmeet Singh ahead of the election in his constituency. Activists marched to Singh's office with banners criticising him.