Fianna Fail Councillor Audrey Buckley has hired a flock of sheep to work on a makeover of an old Cork cemetery by eating overgrown vegetation. 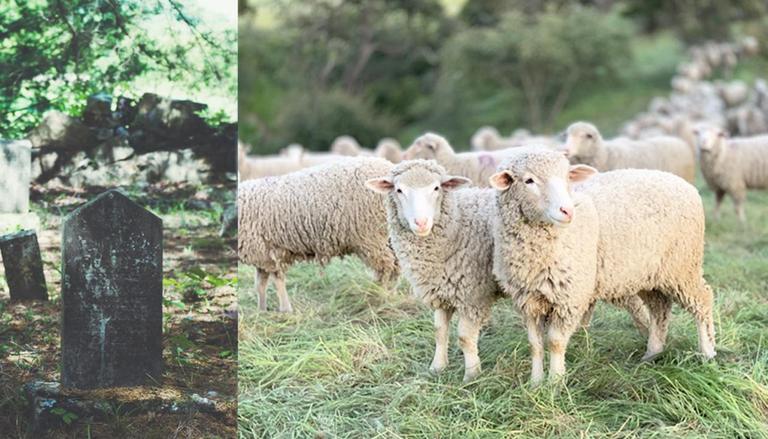 
In a strange experiment, Fianna Fail Councillor Audrey Buckley has hired a flock of sheep to work on a makeover of an old Cork cemetery by eating overgrown vegetation. While explaining his working style, he said that the sheep eat a large amount of vegetation that further helps the Councillor and his team to unearth the graveyard "that haven't been seen forever".
Surprisingly, the sheep have uncovered the grave marker of a two-year-old girl who died on 7 October 1872.

According to the inscription reported by RTE News, the girl whose name was Maria Kate Russel, had died when she was two years, five months and 15 days old. The information on the stone head also suggests that she was survived by her father Crp George Russel, Royal Engineers, Camden Fort Meagher, who was present at the time of her funeral. "The sheep fed around it and we cleaned it off. Cork County Council Heritage administration had not seen anything like them before," said the councillor.

By grasping the information inscribed on the stone head, the councillor contacted the grand-nephew of the girl who had died in 1872. "When we informed the family members of the girl, they were surprised to know something they were literally unaware of. Since then, they have been trying to land in Ireland from the UK, but the ongoing covid pandemic has crushed all their plans," said the councillor and added the family members have offered gratitude to the team members involved in the discovery of the mysterious graveyard. According to the reports, the sheep also uncovered a grave that the councillor believes holds the bodies of a family of four.