Facebook page 'Rate My Plate' has become the epicentre of a massive online culinary debate and the lastest 'Classic Pasta and Gravy' dish by an internet user is now under the critical eye.

Several internet users have been submitting pictures of their meals for review on the page, but the pasta and gravy dish by 'Kristi D' was met with some serious disapproval from Facebook users. While some argued that the mash-up was an 'abomination' to Italian cuisine, some also defended the pasta and gravy and said that it was a 'Spatzle'. The post has garnered over 9K likes with some 28K people commenting on it and has been shared by some 3.8K Facebook users. Take a look at the viral image here:

A Facebook user wrote, “Yes! I love pasta and gravy? when I tell others about this they turn their nose up....until they try it (sic).” Another said, “There is no such thing as 'classic' pasta and gravy no such thing, not on any Italian menu in any Italian restaurant, no Italian chef would ever cook it, no mama's secret recipe or not in any Italian recipe book nowhere ever! You seriously need to take some cooking classes or just takeaways and never ever suggest this abomination (look it up) is a 'classic' ever again! (sic)”.

“In the whole wide world there are only two words that should never be in the same sentence and that's pasta and gravy Kristi D, must be a southern thing,” added another Facebook user. 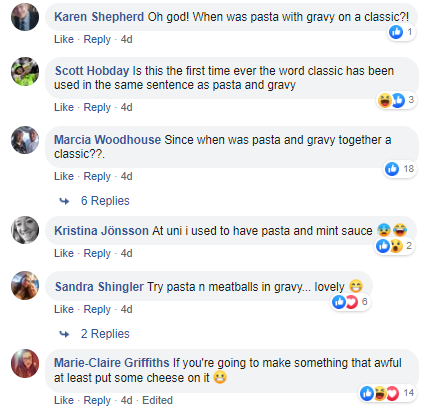 While netizens are arguing whether pasta and gravy is a classic dish or not, the United States recently proposed new rules wherein certain kinds of pasta can be considered as a vegetable for millions of public school meals.

According to reports, the new school guidelines were released by the US Department which would allow more foods like pizza, burgers and french fries to start appearing on school menus. The new administration also believes that the new rules would “simplify” the existing policies under the 2010's Healthy, Hunger-Free Kids Act.

READ: Pink Pasta In Mumbai: Top Restaurants And Street Food Vendors Where You Can Try This Dish