A gender reveals party went wrong after the surprise balloon which was supposed to reveal the gender flew away from the party. Netizens react on the incident

A gender reveals party went wrong after the surprise balloon which was supposed to reveal the gender flew out of the venue. The 29-second clip which was initially shared on Reddit has amassed 6 million views as it went viral. Netizens have offered their take on this rather unfortunate incident.

finally, a gender reveal that i can get behind pic.twitter.com/7UA0ADpsyK

In the video which was originally shared on Reddit, it can be seen that the couple is attempting to burst a black coloured balloon with sticks. The balloon later can be seen moving away as man attempts to chase it but gets obstructed by a fence. The video was later shared on twitter under the caption "finally, a gender reveal that I can get behind" and has managed to get  5,110 Retweets 29,049 Likes.

The video which was shared on Twitter has got 5,110 Retweets 29,049 Likes and netizens have offered their take on this rather unfortunate but hilarious incident. One user commented "ole boy trying to vault the fence and bouncing off really seals it for me". "That was wonderful. “I’ve never jumped a fence before, how hard could it be?” WOMP!" said another user. Another user said that "Best part it that it was so unnecessary, the balloon was long gone before he even tried." Another user said that  "Aw man, now the poor baby will never know it’s gender." A user wondered whether using bats is the best idea "Not sure bats are the best way to pop a balloon."

These gender reveal events are ridiculous.

Gender: void from which no light escapes; which resists and evades all attempts to be known 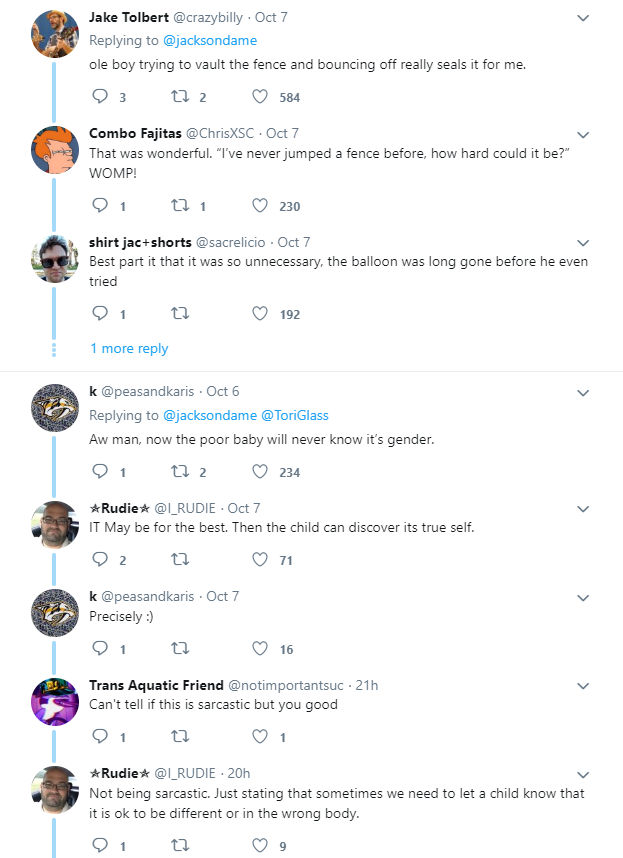