Mexico’s Foreign Minister Marcelo Ebrard on April 7 announced that the country’s health regulator Cofepris has authorised the emergency use of India’s COVID-19 vaccine COVAXIN. While taking to Twitter, Ebrard said that with a “timely decision” to authorise COVAXIN, the options for vaccinations against coronavirus in Mexico are expanding. In a following tweet, the Mexican minister also informed that the country has now approved six vaccines, including AstraZeneca, Cansino, Covaxine, Pfizer, Sinovac and Sputnik V, against the deadly virus. 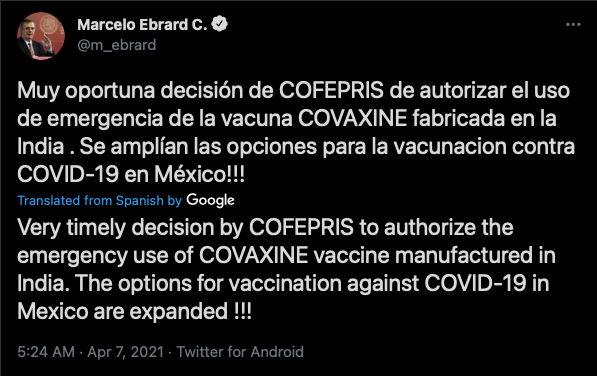 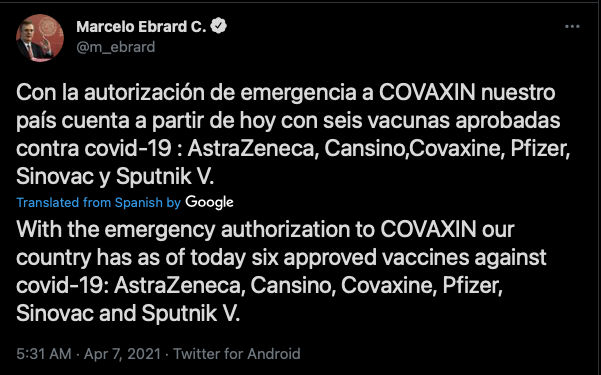 As per the Johns Hopkins University tally as of April 7, 2,256,509 have been infected with novel coronavirus with 2,256,509 casualties in Mexico. According to the Associated Press, so far, the country has received 14.7 million doses of several brands of vaccines and administered almost 9 million shots. Experts say that the number of people vaccinated is a small amount, considering the country’s population of 126 million.

READ | Mexico houses migrants sent back from US border

Meanwhile, besides administering these vaccines to the citizens of India, the Centre has also exported them to other countries under the Vaccine Maitri programme. Vaccine Maitri programme that was started around a month ago, aims to help poor countries amid the global pandemic. In this brief period, the country has got delivered around 45.6 million doses of Oxford-AstraZeneca Covid-19 vaccine manufactured by the Serum Institute of India (SII) and Bharat Biotech's indigenous vaccine, of which 38.47 million doses were commercial supplies and 7.12 million doses were granted to around 45 countries.