The Cuban government has blamed the US administration and anti-Castro groups in Florida for provoking the demonstration which is scheduled next week. 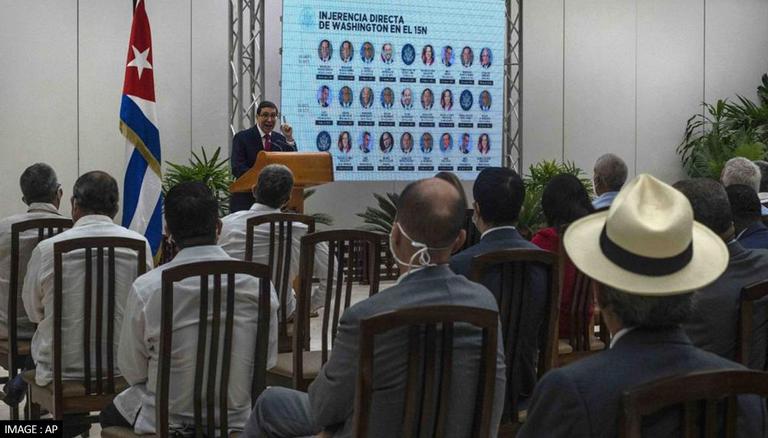 
The Cuban government has accused the United States of making attempts to "destabilise" the island nation, as regime opposition parties planned rallies in Havana and other regions which is scheduled next week. The protest march, which is set for November 15, Monday, will coincide with the nation's reopening from the 20-month shutdown because of the COVID outbreak, as well as the 502nd anniversary of Havana's establishment, AP reported.

Facebook's Archipiélago (Archipelago) program has organised the demonstration. Organisers had applied for approval to conduct the demonstrations but were rejected. Despite the ban on the march, the organisers have asked people to participate in it. The government further claimed on Wednesday that a decision to suspend an opposition protest will not harm the country's image, and blamed the US and anti-Castro groups in Florida for provoking the planned march.

When questioned about the demonstration that has been organised and extensively publicised on social media, Cuban Foreign Minister Bruno Rodríguez told the Associated Press, "Reality is what determines image".

Quoting Rodrguez, AP reported, "Social networks are a complicated terrain, where along with knowledge and truth, many lies and false news are spread, I’m sure that it won’t be possible to demonize or isolate Cuba internationally."

Hundreds of foreign diplomats and ambassadors were invited to a conference on Wednesday by the Foreign Ministry, which charged the US administration with organising the demonstration as a part of a strategy to destabilise the nation. The Cuban socialist administration is determined to avoid a repetition of July's greatest public protests, which took officials off guard. They have critised some of the turmoil on US economic sanctions and US-based opponents.

READ | Cuba waits for US and WHO to approve its vaccines

We call on the international community to reject this new aggressive maneuver of the United States against the Cuban people. This is a serious and unacceptable action that violates International Law.#CubaVive

Rodriguez warned the diplomats by saying, "In no way will we allow the permanent aggression of the United States ... to generate conditions of internal subversion ... to spoil the party," AP reported. Furthermore, Rodriguez described the scheduled demonstration as a plot by the US government and authorities to overthrow the Cuban regime. He said that US restrictions on Cuba are intended to suffocate the island, resulting in civil unrest and the appearance of a "failed state".

Furthermore, the spokesperson for the United States Department of State Ned Price wrote on Twitter that a new generation has participated in Cuba's human rights advocates and urged their administration to uphold human rights. He further said, "On November 15, the Cuban government can make the right choice — to listen to its people as they peacefully march for their voices to be heard."

READ | Cuba expects some economic recovery for next year

A new generation joins Cuba’s human rights activists and implores their government to respect human rights. On November 15, the Cuban government can make the right choice--to listen to its people as they peacefully march for their voices to be heard. #15N

Meanwhile, during the July protest, tens of thousands of Cubans took the streets and protested against power failure, shortages, high pricing, as well as criticisng the government. The administration has not stated how many individuals were held, but human rights organisations have claimed that scores of people were apprehended or went missing as a result of their participation.

WE RECOMMEND
US: Donald Trump says he is ready to talk to President Biden if it 'could help' country
Russia claims it detected US Air Force reconnaissance aircraft within 35 km of its border
PM Modi 'wholeheartedly' welcomes US to ISA, says it will further strengthen alliance
US authorities to send legal notices to 78K migrants with unprocessed border docs: Report
US District Court Judge allows committee to access Capitol riot docs despite Trump request