Egypt's legal system in the spotlight after an Egyptian teenager's rape case. It reignited the debate over the treatment of women in Egypt’s legal system.

The prosecution of a 15-year-old girl who killed a bus driver after he allegedly tried to rape her has reignited the debate over the treatment of women in Egypt’s legal system, including the practice of virginity tests and blaming victims of sexual violence. In July, the teenager made headlines after she confessed to police that she stabbed to death a bus driver who she alleged, had kidnapped her in a deserted rural area near Cairo and sought to sexually assault her at knifepoint. The girl said she tricked her alleged assailant, took away his knife, and stabbed him several times before running away.

Shortly after her arrest, the teenager was required to undergo a virginity test, an invasive procedure that rights groups say in itself amounts to sexual assault. Several women’s rights groups have offered legal assistance, arguing for leniency for the teen because she defended herself against a sexual attack. They hope that a judge’s ruling in her favor could set an important legal precedent and help challenge what they view as a deep-seated misogynistic culture of blaming female victims rather than male attackers. “This case reveals the dualism in Egyptian society,” said Intissar Saeed, president of the Cairo Foundation for Law and Development. “I myself have sympathized with her since day one. But when I wrote about her on my Facebook page some male lawyers attacked the girl on my page saying she was not a decent woman.” 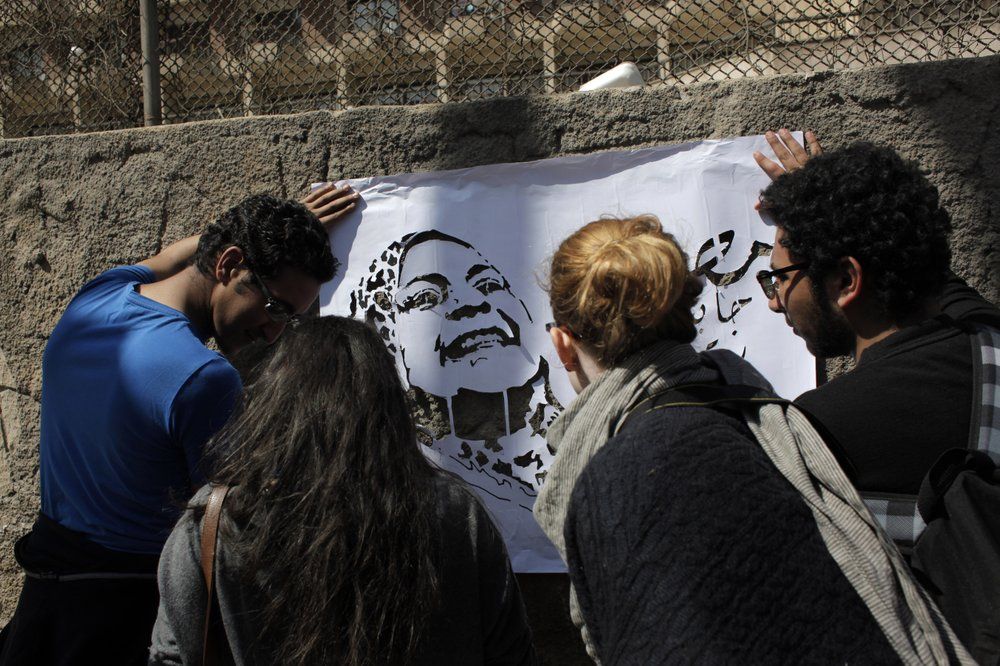 The teen’s name was widely published in the Egyptian media. The case highlights the culture’s obsession with female virginity. In conservative areas, relatives celebrate a new bride’s loss of virginity by brandishing a bloody sheet in public, a practice they believe affirms the family’s honor. Unlawful virginity examinations garnered attention in 2011 when several women said they were detained by military personnel and forced to undergo virginity tests while protesting the interim military government that took over the country after the ouster of former President Hosni Mubarak.

During her interrogation, the girl said she was on a date with her boyfriend before riding the bus — a statement that could easily undermine her reputation and probably her credibility in conservative Egyptian society, where dating is frowned upon. Her boyfriend, along with a friend of his, is in custody pending investigations into any potential links to the crime. After her detention, the girl was required to undergo a vaginal test which determined she was a virgin — which in the Egyptian context could be viewed as helpful to her case. Saeed explains that this test is a routine legal procedure whenever a woman reports a rape or alleged rape. Yet, she finds it irrelevant in this case. “She said (the bus driver) tried to rape her but did not so I believe there was no need for this examination,” said Saeed, whose advocacy group is part of the teen’s legal team.

A campaign against the virginity test

Feminists have been campaigning for the girl’s release and calling for her to face a lesser charge than murder. However, last month, the investigating judge upheld an appeal by the prosecutor against an earlier court decision to release her and ordered her detained for another 30 days. “There is a frightening misogynistic sense of solidarity in the society,” said Mozn Hassan, founder of Nazra for Feminist Studies, a group that has long provided legal and psychological support to women who had to undergo a virginity test. The test has become a tool to weigh the virtuousness of the victim in cases of sexual assault, added Hassan. “If she is not divorced, married or widowed and turned out not to be a virgin, she gets automatically labeled as indecent and deserving what she had gone through.”

“The man is always presumed innocent. Yet, it is very logical in a country where more than 95 percent of women are sexually harassed, that we should start off by believing what the woman is saying,” she said. Sexual harassment, mostly ranging from catcalls to occasional pinching or grabbing, is rampant in Egypt. Polls have found that most men and women in the conservative Muslim country believe it is justified if women dress “provocatively” in public.

The verdict could be historic!

The teen’s lawyers hope she will be charged with a so-called honor killing rather than murder. Honor killings traditionally are acts of vengeance committed by male family members against female family members deemed to have brought dishonor upon the family. But the girl’s attorneys believe the concept could be applied in her case. Under Egypt’s penal code, men are more likely to receive lighter sentences if convicted of an honor killing, discrimination that activists have been struggling to reverse for decades. But there are no guarantees for the young female defendant, Hassan said. “This is the first time we have a girl that goes as far as killing the man who tried to rape her. If the court rules in her favor, it will be a historic precedent for the Egyptian judicial system,” said Saeed.