The luxury passenger ship, RMS Titanic, famously sank off the coast of Newfoundland after hitting an iceberg in the early hours of April 15, 1912. 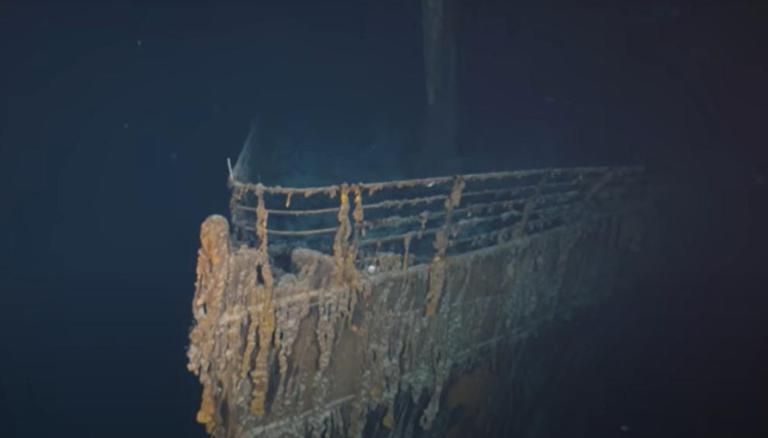 
Nearly 110 years after the RMS Titanic sank, a stunning video from the wreck shows the ship in 8K resolution for the first time. OceanGate Expeditions on Tuesday released a high-resolution video from its latest expedition to the site on YouTube. The 60-second video clip takes viewers on a tour of the outside of the famously doomed ship. The video clip also unveils details of the ship that were never seen before along the deck and bow.

According to a press release, the video shows the hull of the sunken vessel and some brand-new features in extraordinary detail. The video also highlights scenes of Titanic’s renowned bow, the portside anchor, hull number one, an enormous anchor chain (each link weighs approximately 200 pounds or nearly 91 kilograms), the number one cargo hold, and solid bronze capstans.

"Early in the video you can see the crane used for deploying the enormous 15-ton anchor still located on the deck of the shipwreck, and the shackle that was originally attached to the main mast that has now collapsed," PH Nargeolet, a veteran Nautile submersible pilot and Titanic diver, said in the press release.

The video also captured the dramatic evidence of the decay where some of the Titanic’s rails had collapsed and fallen away from the ship. As per the OceanGate Expeditions, the new 8K video allows researchers to zoom in on portions of the wreck and still maintain 4K quality, which shows "phenomenal colors" and new structures on the ship not seen before.

Rory Golden, OceanGate Expeditions Titanic expert and veteran Titanic diver pointed out towards the elements he'd never before the video. He said, "For example, I had never seen the name of the anchor maker, Noah Hingley & Sons Ltd., on the portside anchor."

Notably, the OceanGate plans to return to the wreck in May of 2023 to track the continuously occurring changes in the Titanic’s condition.

Sinking of the Titanic

The luxury passenger ship, RMS Titanic, famously sank off the coast of Newfoundland after hitting an iceberg in the early hours of April 15, 1912. The ship was heading to New York City after departing from Southampton, UK. The ship was earlier claimed to be unsinkable and was the largest and one of the most lavish ships of the time.