Florida: Man Fulfills His Dream Of Swimming On His 93rd Birthday

A 93-year-old man, Howard, having lived more than 20 years in Florida, recently fulfilled his lifelong wish of going for a swim in the ocean on his birthday

A 93-year-old man, Howard Fisher, having lived more than 20 years in Florida, recently fulfilled his lifelong wish of going for a swim in the ocean near his house on his birthday.  Howard told his daughter that it was probably too late for him to do such a thing owing to his old age but Sandra decided otherwise and fulfilled her father's wish.

Sandra talked about how her father grew up in the city of New York and later on moved to Fort Lauderdale, Florida, in the year 1969. She further added that how her father had taken along everyone to the beach but he himself never went for a dip in the ocean water. Sandra talked about a picture dating back to the childhood that had her and Howard playing on the beach.

The sweet gesture by Fisher's daughter materialized when she went to visit him in Florida and then took him to Anna Maria Island situated on the Gulf of Mexico.

While speaking to an international media outlet, as soon as the man went into the water, he kept on talking about how beautiful the day was while he was helped by his daughter to float around and have some fun. She further added that how Howard enjoyed every minute he spent fulfilling his wish. The 93-year-old was excited and told his daughter as to how he was floating like a bottle cork.

In addition to this, Sandra stated that the celebrations did not end with her father's swim as they went out for a birthday lunch right after to a restaurant that was close to the beach.

The wonderful gesture by Howard's daughter was shared on her Facebook handle and was met with sweet comments from a lot of people. One user commented by recalling her last trip with her dad. Another user sent her best wishes to the daddy-daughter duo by calling Sandra a wonderful and loving daughter. 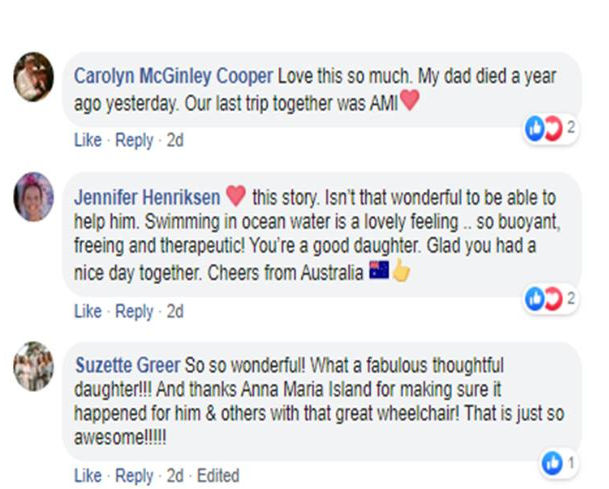 Having served in the Navy during World War-2 and then working as a daily wage earner in Florida, Howard has lived a regret-free and a wonderful life raising his family in Florid and his daughter just wanted to make his day a memorable one and a birthday to remember for life.

Read: Tristan Thompson Shares The Most Cherished Moment With Daughter