A French Ski resort which recently used a helicopter to deliver snow from higher up the mountains to the lower slopes has left the ecologists angered.

A French Ski resort which recently used a helicopter to deliver snow from higher up the mountains to the lower slopes has left the ecologists angered. According to international media reports, Minister of Ecological Transition Elisabeth Borne said that using helicopters to bring snow to ski resorts is not an option. The authorities at the ski resort reportedly made the decision of transporting snow after a mild winter left the lower slopes bare.

The authorities at the ski resort, Luchon-Superbagnères in the Pyrenees, told an international media outlet that the helicopter spent two hours transporting 50 tonnes of snow to drop on the lower slopes used by beginners and ski schools. The cost of transporting the snow was reportedly between €5,000 to €6,000. Hervé Pouanu, the director of the local council in France's southwest said that the resort is expected to recoup at least ten times the cost of the operation from the business that would have been lost from the lack of snow.

However, Pouanu reportedly acknowledged that the operation was not eco-friendly and he also explained that it was an 'exceptional move'. He also mentioned that the authorities at the ski resort have no intention of doing it again, nor they have any intention of covering the whole resort in snow.

The move by the ski resort has been criticised by several ecologists. Patrick Jimena, an ecologist and former councillor in a social media post said he was 'furious' and described the decision as 'crazy'. He further added, “No justification can be possible for this nonsense. At the time of global warming, some people empty their boat with a spoon as a tsunami approaches! Elected officials of the Haute-Garonne departmental council should think twice before funding such actions”. '

Bastien Ho, an environmental campaigner further described the snow deliveries as 'a short term aberration' which fights against global warming by contributing to it. 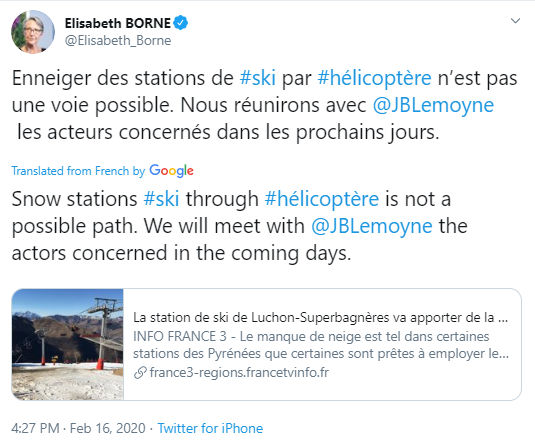