As countries across the globe continue to bear the impacts of coronavirus outbreak, Germany’s economy is expected to shrink by 6.3 per cent in 2020.

As countries across the globe continue to bear the brunt of coronavirus outbreak, Germany’s economy is expected to shrink by 6.3 per cent in 2020 because of the pandemic. According to reports, German finance minister Peter Altmaier also said on April 29 that it would be the biggest collapse in 50 years. Most world leaders are currently battling to find a balance between the plunging economy and flattening the curve of COVID-19 spread. Germany has also extended the warning against foreign travels until June 14. Meanwhile, on the economic front, Altmaier has assured that the German economy would rebound in 2021.

The highlights of German economic policy said, “The corona pandemic presents Germany with major health, social and economic challenges. Economic output is likely to collapse by over 6 per cent this year. However, the uncertainty of current forecasts is high.” 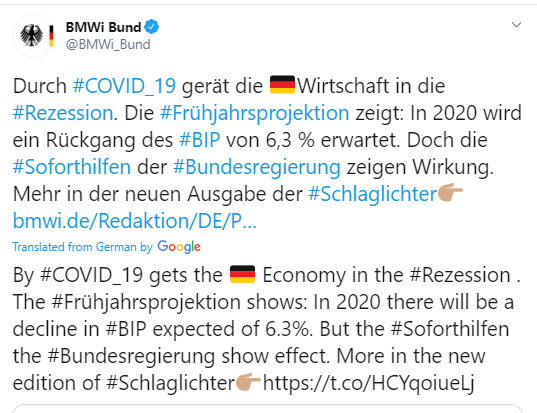 COVID-19 outbreak ‘under control’ in Germany

While most parts of the world are currently combatting the deadly coronavirus outbreak, German Health Minister Jens Spahn said on April 17 that the outbreak is “again under control” in the country. Crediting the positive change in Germany to early lockdown, Spahn said that the government would make ten million masks every week starting from August.

German Health Minister said that since April 12, “there are more recovered people every day than new infections”. Spahn also called it an “important and encouraging development”. Spahn showcased optimism and noted that Germany has a “good chance” of battling the COVID-19 pandemic and lauded the citizens and its healthcare system.

Meanwhile, after originating from China’s “wet markets”, the Coronavirus has now claimed 219,287 lives worldwide as of April 29. According to the tally by international news agency, the pandemic has now spread to 210 countries and has infected at least 3,162,438 people. Out of the total infections, 975,673 have been recovered but the easily spread virus is continuing to disrupt many lives. Major cities have been put under lockdown in almost all countries and the economy is struggling.

Read - Germany: Rate Of Virus Infection Has Crept Up

PEOPLE HAVE PLEDGED SO FAR
LATEST NEWS
View all
5 hours ago
'findings on safety & efficacy of hydroxychloroquine expected by mid-june': who
2 hours ago
Brazil hospital staff live on site to shield elderly
46 mins ago
School children return to classroom in south korea
32 mins ago
Argentina medics demand ppe, support for shantytown
39 mins ago
Japan police arrest man in kyoto anime arson that killed 36