The Gilgit-Baltistan (GB) Assembly has unanimously passed a resolution demanding the status of the interim province for the region, said GB Chief Minister.

The Gilgit-Baltistan (GB) Assembly has unanimously passed a resolution demanding the status of the interim province for the region, said GB Chief Minister Khalid Khurshid Khan on March 9. The resolution was presented by the leader of the House along with Khan stating that Pakistan’s principal position aligning with the United Nations (UN) resolutions on the Kashmir issue must be upheld. The resolution reportedly read, "GB should be given the status of an interim constitutional province and representation in the National Assembly and other federal bodies".

Khan even took to Twitter on Tuesday saying, “Gilgit-Baltistan Assembly unanimously passed a historic resolution demanding the provision of constitutional rights to the region. I myself presented the resolution in the assembly. I am thankful to the opposition  leader for their support.”

“And also the members of the government for working their best to create consensus. The demand for constitutional rights is a unanimous demand of the people of GB, not of an individual/ party only. The unity we've shown on this issue needs to be repeated again at the federal level,” he added. 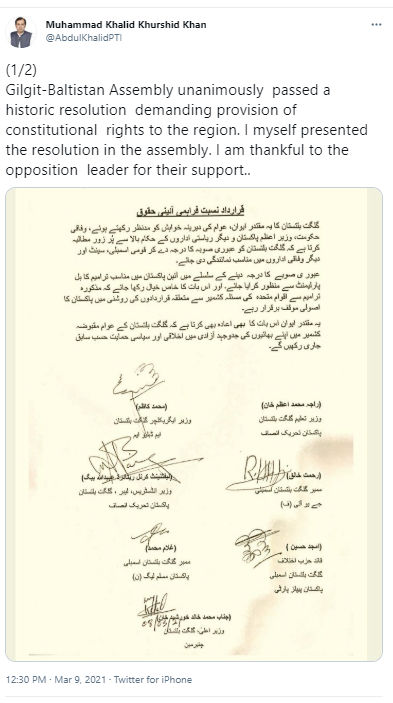 READ | Pakistan to get 45 million doses of Made in India COVID-19 vaccines in March: Report
— Gilgit-Baltistan Assembly (@gb_assembly) March 9, 2021

Taking to Twitter, Pakistan’s Federal Minister of Science and Technology, Fawad Chaudhary declared Tuesday as a 'historic day' while also noting that the development of the house passing the resolution unanimously is a huge “leap forward”. He said, “Histrionic day for the people of #GilgitBaltistan all parties unanimously demand interim provincial status for GB to ensure constitutional rights for the people... truly a leap forward... kudoos to all who made it possible.” 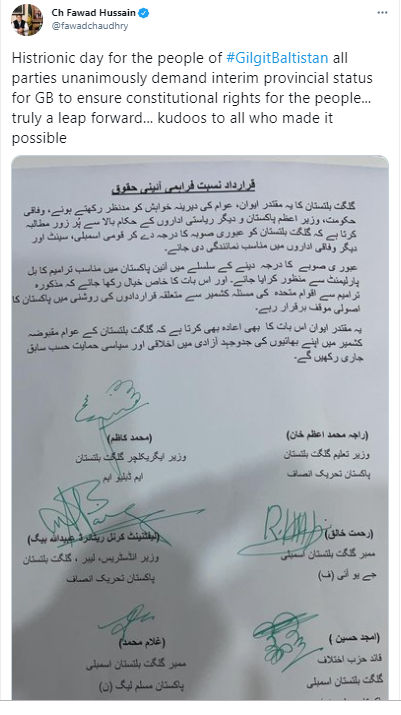