India at UNSC highlighted that there should be no "double standards" in dealing with terrorists globally; calls for concrete steps to deal with the threats. 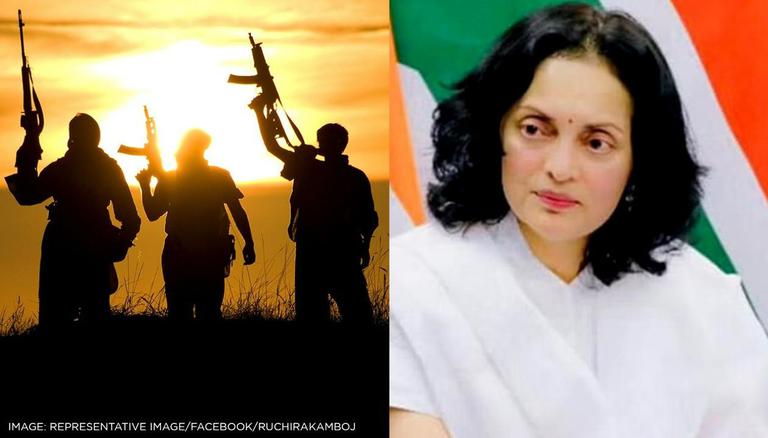 
India at the UN Security Council (UNSC) on Tuesday highlighted that there should be no "double standards" in dealing with terrorists globally. Speaking at the UNSC session on 'Threats to international peace and security caused by terrorist acts', India's Ambassador to the council Ruchira Kamboj stressed that there is an immediate need to ensure concrete progress to effectively deal with the threat of terrorism. She also raised concerns over the increase in the use of technologies, including social media to spread "violent and extremist" propaganda, that has posed extreme challenges to government and tech industries alike.

"There should be no double standards in dealing with terrorists. We should refrain from labelling terrorism based on motivations," Karamboj said during the briefing.

The Permanent Representative also called for effective functioning of the Sanctions Committee, adding that "double standards and continuing politicisation have rendered credibility of Sanctions Regime at an all-time low." She lamented, most regrettably, that some of the most notorious terrorist outfits are on hold from being placed on the evidence-based list of the UN. She further emphasised, that the international community must address the linkages between terrorism and organised crime.

"The growing use of the Internet and social media platforms to spread terrorist and violent extremist propaganda has posed challenges to Governments and the tech industry alike. The continued increase in the use of new technologies to move and store funds, including virtual assets, online exchanges and wallets, privacy coins (EACs), and potential misuse of dual-use technologies pose the risk that terrorists will seek to abuse these systems for terrorism financing and other terror-linked purposes," India's Permanent Representative to the UN Ambassador Ruchira Kamboj said.

Addressing the UNSC, Karamboj described terrorism as a massive threat to the peace and security of the entire world. She insisted that the international community must have a "unified, coordinated, and most importantly effective" approach toward countering this global challenge.

Karamboj decried the "spate of terror" that gripped India's immediate neighbour, including the ghastly terrorist attack on Karte Parwan Gurudwara in Kabul in June, followed by another attack near the same religious site in July. "ISIL-K, with its base reportedly in Afghanistan, continues to issue threats of terrorist attacks on other countries," the envoy said. She highlighted that the linkage between the terror groups listed under the UNSC such as Lashkar-e-Taiba and Jaish-e-Mohammed, which  poses a serious threat to the vulnerable Afghan region.

'Selective filtering of input from member states is uncalled for': Karamboj

Karamboj asserted that the global threats must be addressed on priority further ensuring that the proscribed terrorists, entities, or their aliases are not supported by terror sanctuaries. She expressed discontent over the "puzzling" SG report which allegedly "choose not to take notice of the activities of several proscribed groups in the region, especially those that have been repeatedly targeting India." She stressed even though the SG report mentioned that terror groups with linkage to Al-Qaeda are gaining strength in Africa it should not be seen as an isolated threat.