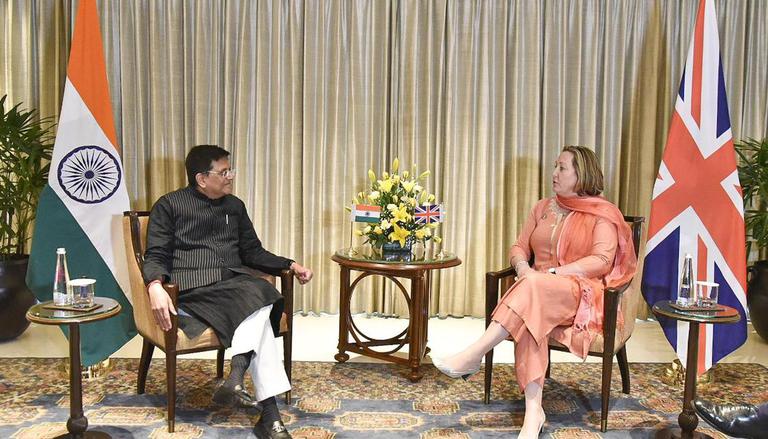 
Union Minister for Trade and Commerce Piyush Goyal on Thursday formally initiated India-UK Free Trade Talks in a meeting with his British counterpart Anne-Marie Trevelyan. In a tweet, the Union Minister informed that the negotiations "will be held over an array of trade opportunities of mutual interest" benefiting both India and Britain. The meeting came after UK Secretary of International Trade, Trevelyan, arrived in India on Wednesday, in a bid to expand UK's effort to secure post-Brexit trade deals with countries.

Met with UK Secretary of State for International Trade @AnnieTrev for the launch of India-UK Free Trade Agreement Negotiations.

Deliberations will be held over an array of trade opportunities of mutual interest benefiting both sides. 🇮🇳 🇬🇧 pic.twitter.com/9GPnyMtQIk

If reached a deal, India-UK Free Trade Agreement will cater huge benefits for both the parties and boost overall bilateral trade up to 28 billion Euros by 2035, UK Department for International Trade said in a press release on Wednesday. In addition, it is also expected to increase wages up to 3 billion Euros across the UK. "Britain wants an agreement that slashes barriers to doing business and trading with India's  2 trillion Euros economy and market of 1.4 billion consumers, including cutting tariffs on exports of British-made cars and Scotch Whisky," the press release added.

READ | Barcelona vs Real Madrid: How to watch Spanish Super Cup match in India, US & UK?

The India-UK Free Trade Talks is based on one of Britain's top post-Brexit priorities, which is to ensure free bilateral trade ties from the European Union's common trade provisions. With India's "booming economy", UK businesses will have a market for manufacturing and financial services for which London is ready to secure concessions. It is to mention that India and Britain share strong ties as more than a million people of Indian origin live in Britain after decades of migration. "As we take our historic partnership with India to the next level, UK independent trade policy is creating jobs, increasing wages, and driving innovation across the country," UK PM Boris Johnson said in a statement.

"A trade deal with India's booming economy offers use benefits for British businesses, workers and consumers. We are seeing the opportunities offered in growing economies of the indo-pacific to cement our place on the global stage," the UK PM added.

On the other hand, Trevelyan has dubbed the prospects of the India-UK Free Trade Talks as a "golden opportunity." With India on the course to become the world's third-largest economy by 2050, securing a trade deal will offer Britain several commercial prizes. In addition, with the EU making little progress with a trade deal with India, a long-term bilateral agreement will surely be a "definitive score" for the UK.