A mass stampede at an ultra-Orthodox Jews festival in northern Israel on Friday reportedly killed 45 and injured more than 150. Tens of thousands of attendees at Lag B’Omer pilgrimage at Mt. Meron in the Upper Galilee convened in one of the country's largest events since the pandemic began. According to local agencies and Israeli press reports, the crowd of faithful was pushed by those who wanted largely Haredi devotees to be in the forefront. The festival, which involves bonfire and dancing around the Galilee tomb of the second-century sage Rabbi Shimon Bar Yohai, witnessed the rush after participants fell off a slippery staircase where the Hasidic community of Toldos Aharon was holding the ceremonial rituals.

According to a Channel 12 news report, the overcrowding caused many participants to crush under the feet of others in the densely packed crowd. More than 100,000 people had reportedly gathered at the site of the incident, the village of Meron. The incident is being called the worst civil disaster in Israel’s history, with a death toll more than the Mount Carmel forest fire of 2010.

“There were heartbreaking sights here, people crushed to death including children,” Prime Minister Benjamin Netanyahu told Israeli reporters. “A large proportion of those who have perished have not yet been identified. This is tearing up the hearts of families,” he continued. 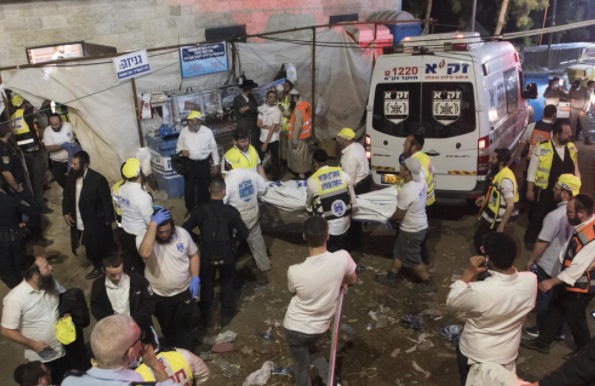 [Israeli security officials and rescuers carry a body of a victim who died during a Lag Ba'Omer celebration. Credit: AP]

In the video footage of the scene circulating across social media, the aggravated mob can be seen jeering at PM Netanyahu, holding the law enforcement and his government responsible for the accident as he declared a national day of mourning on Sunday. Shortly, Netanyahu’s statement issued by the Prime Minister's Office read: ”Let us all unite with the grief of the families and pray for the recovery of the wounded.” He further thanked the rescue forces "for preventing a much heavier disaster.” Netanyahu said, that his government "will conduct a thorough, serious and in-depth investigation to ensure that such a disaster does not recur." 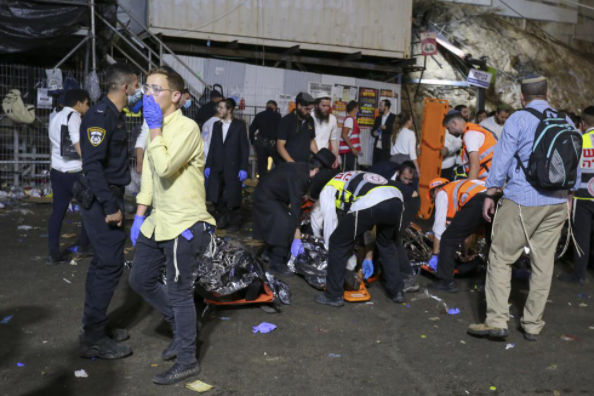 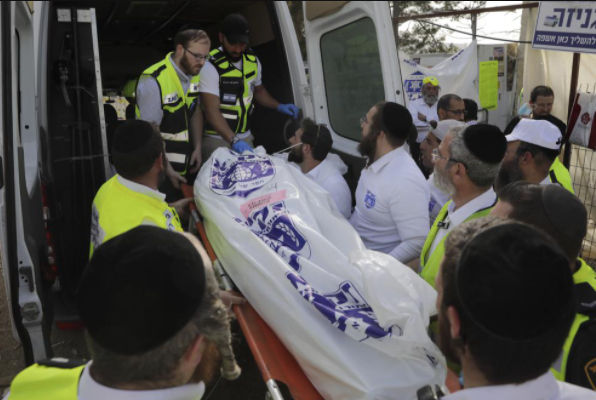 In the harrowing images and visuals that were released, Israeli ambulances and rescue helicopters could be seen flocking to the Toldos Aharon site, a Jerusalem Hasidic movement. Rescue units from the Israel Defense Forces can be seen pulling out the dead bodies from the pile. Those wounded were rushed to the nearby hospitals on the stature. Witnesses told Channel 12 that the devotees were trampled under the foot of others as scenes in the likeness of mass hysteria were reported.

"The United States stands with the people of Israel, and with Jewish communities the world over, in mourning the terrible tragedy at Mount Meron," Biden said in a statement."The loss of life among worshipers practicing their faith is heartbreaking."

Israeli newspaper Haaretz reported, "It happened in a split second; people just fell, trampling each other. It was a disaster.”  Rescue operators asked the families to bring photos of attendees to Israel's central morgue to identify the dead. Israelis were seen racing against time to perform the burial of their loved ones before the start of the Jewish Sabbath when burials are forbidden.  Several world leaders and ministers sent their condolences to the victims of Israel's Meron tragedy.

Deeply saddened at the tragedy in Israel at Mount Meron during the celebrations of Lag Ba'omer. Extend my condolences and wish the injured a speedy recovery.

Deeply saddened by the terrible news of injuries and deaths at Lag Ba'omer celebration on Mount Meron. My heartfelt condolences to the families of the victims and wishes of speedy recovery to all those that were injured.

Our hearts go out to the people of Israel tonight following the terrible tragedy at Mount Meron. We offer our condolences to the families and friends who lost loved ones in this disaster, and wish a full and swift recovery to those injured.

Shocked and deeply saddened by the tragic events at Mount Meron in #Israel. Our hearts go out to the people of #Israel and the families and loved ones of the victims. We wish a swift recovery to all those injured. @Gabi_Ashkenazi