Japan Orders Evacuation Of Over 1.2 Million People After Heavy Rains Cause Floods

Japanese authorities have ordered the evacuation of 1.23 million people in the prefectures of Fukuoka, Saga, Nagasaki and Hiroshima. 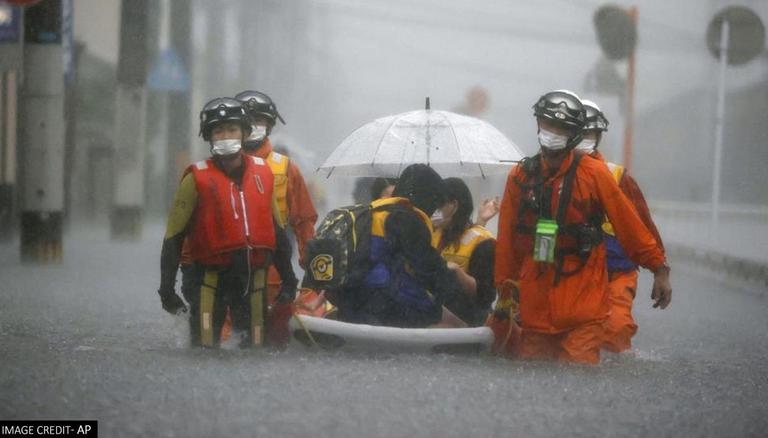 
Heavy rains continue to trigger floods in some areas of southwestern Japan. Japanese authorities have ordered the evacuation of 1.23 million people in 4 southwestern provinces due to the heavy rainfall, ANI reported citing NHK broadcaster. The government has ordered an evacuation for residents of the prefectures of Fukuoka, Saga, Nagasaki and Hiroshima.

The Fire and Disaster Management Agency has informed that dozens of homes around the country have been damaged by floods and mudslides, according to AP. The heavy rains have led to disruption of transportation and overflowing rivers. Rescue workers have been rescuing residents from their homes in the southern city of Kurume. The rains caused a mudslide in Unzen in the Nagasaki prefecture, which buried four people. One of those buried was killed and another was seriously injured, while a search operation is underway for two others. A woman in her 50s was pronounced dead, while a man in his 60s was seriously injured, AP reported citing Unzen city officials.

Japanese Prime Minister Yoshihide Suga in a tweet has informed that "heavy rains may continue to fall over a wide area, centred on western Japan". Suga has urged people to check the hazard map for the area in which they live. He urged people to stay alert for evacuation advisories, weather information, and overflowing of rivers. The Japan Meteorological Agency has informed that more rain is expected in the coming days. The Japanese meteorological department has issued heavy rain and mudslide warnings in the Kyushu region and other parts of Southwestern Japan. Rains have led to the suspension of trains in Hakate and Osaka. On August 13, the Japanese meteorological agency informed that nearly 500 millimetres of rain fell in parts of Nagasaki in the past 48 hours. According to the Japanese meteorological agency, rains have exceeded the average for August.

PM Suga: An active weather front has resulted in record heavy rains falling.
From now, throughout next week over a long period, heavy rains may continue to fall over a wide area, centered on western Japan. We must stay highly alert (1/5) pic.twitter.com/4t4SZ4alig

because we will continue to face conditions in which a large-scale disaster could occur anywhere, at any time.

We have established a Specified Disaster Management Headquarters and, under the policy of prioritizing human life above all else, (2/5) pic.twitter.com/9aQPImVjiL

I urge all citizens to once more check the hazard map for the area in which they live, pay close attention to evacuation advisories and weather information, and stay alert regarding the overflowing of rivers and other hazards. (4/5)