A protest led by women rights activists in Kabul turned violent after the Taliban forces prevented them from marching towards the presidential palace. 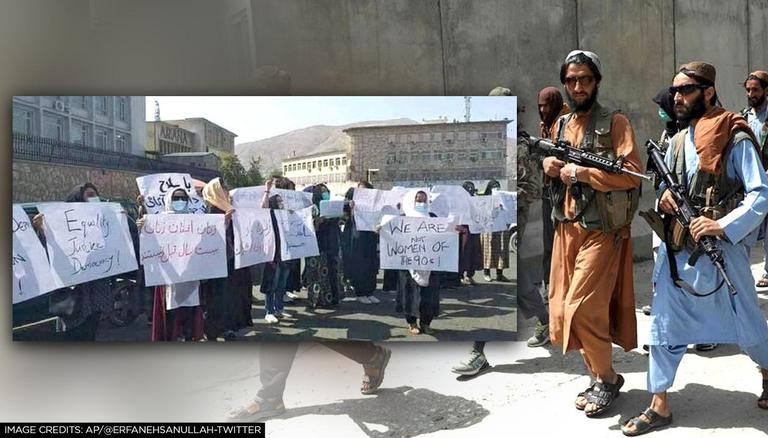 
In recent developments, a protest led by women's rights activists in Kabul turned violent after the Taliban forces prevented them from marching towards the presidential palace. According to Tolo News, the insurgent group prevented the demonstrations from continuing by spraying tear gas. The women in Kabul have been staging protests, demanding equal rights and opportunities, inclusion in work and education under the new government.

Friday’s demonstration marked the second day of the protest. The women activists staged protests seeking equal rights and ensuring decision-making roles for them in political life in the country that has been taken over by the militants. However, the Taliban attacked the peaceful women protesters, which resulted in two women sustaining injuries.

A group of women staged a protest today in #Kabul to demand their right to work & education. Taliban attacked on them & in a result two women got injured.
The Taliban have reportedly banned many women from working outside their homes and girls from attending school, university. pic.twitter.com/JYikwd7bFi

According to ANI, the women’s rights activists in Kabul has asked the new Afghanistan government, which will reportedly be headed by Taliban co-founder Mullah Baradar, to ensure decision-making roles for women in the future government. Afghan women have been calling for the recognition of women’s political, economic and social rights. On Thursday, dozens of Afghan women also held demonstrations in the western Afghan city of Herat.

Experts believe that women in the war-torn nation are most likely to face an uncertain future under the Taliban regime. In recent weeks, the insurgent group has also been sending mixed signals about women working. Back in August, the group’s spokesman, Zabiullah Mujahid, had said that women who work with the government should stay at home until they can ensure their safety on the streets and in offices.

The Taliban have banned many women from working outside and girls from attending schools or universities. But the group has, however, asked female healthcare workers to return to work. According to a Taliban spokesman, women can continue to serve in government positions in Afghanistan, but they will not be guaranteed cabinet or other prominent roles. When asked if women and ethnic minorities would be allowed to serve in the future Afghan government, the deputy head of the Taliban political office in Qatar had told the BBC that prominent positions in the new administration would be chosen on merit.