Kazakhstan: At Least 164 Killed In Anti-govt Protests; Around 6000 People Arrested

At least 164 people have been killed during violent anti-government protests in Kazakhstan, the Heath Ministry informed on Sunday. 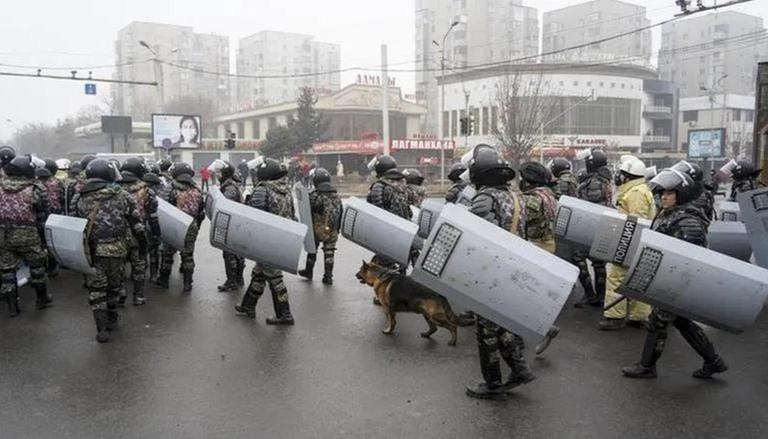 
At least 164 people have been killed during violent anti-government protests in Kazakhstan, the Heath Ministry informed on Sunday. Separately, the Presidential office said that almost 6,000 people have been arrested, including a “substantial number of foreign nationals”.

It is pertinent to mention that the deadly protests that erupted in Kazakhstan in recent days have seen the government resign and the declaration of a state of emergency as troops from the Russia-led military have been deployed to help contain the unrest.

"During the unrest, 164 people died in Kazakhstan, [including] 103 in Almaty," a statement on the Telegram channel with releases of Kazakh government agencies said.

The protests, triggered by a rise in fuel prices, turned into huge riots as they spread across the country. However, on Sunday, the Presidential office informed that the situation had stabilised, with troops continuing “cleanup” operations and guarding “strategic facilities”.

Meanwhile, according to reports, the Kazakhstan police have opened around 125 criminal cases related to incidences of violence, including charges of violence, murder, robbery.

High-profile officials, including the country's former head of National Security Committee Karim Massimov, have been detained on suspicion of treason. The officials have informed that forces are now performing tasks to protect important military, state and socially significant facilities in the city of Almaty and adjacent areas until the situation in the country is “fully stabilised”.

Kazakhstan is presently experiencing its worst street protests since gaining independence from the Soviet Union around three decades ago. Dozens of people have been killed in the unrest, which has brought global attention to citizens’ wider discontent with authoritarian rule. The unrest in the Central Asian nation has even prompted Kazakhstan President Kassym-Jomart Tokayev to issue shoot-to-kill orders to end the riot he has blamed on foreign-trained “terrorists”.

The chaos in Kazakhstan began last week triggered by a massive increase in fuel prices, with people flooding the streets in Zhanaozen and Aktau before spreading to the rest of the nation and turning into a violent riot. It was announced that the country will be in a state of emergency due to the deteriorating situation that will last until January 19. Over $200 million in damages have been estimated so far, as per Sputnik.