As of April 27, US Centers for Disease Control and Prevention said that it already started to receive phone calls regarding consumption of lysol disinfectants.

Lysol and Dettol manufacturer company has urged people not to consume its cleaning products, through “injections or drinking, or any other route” after US President Donald Trump suggested that disinfectants can be “injected in the body” to clean the lungs and fight coronavirus. Reckitt Benckiser, a British company, warned in an official statement and on social media that consumption of such products could be “life-threatening” and dangerous.

“Due to recent speculation and social media activity, RB (the makers of Lysol and Dettol) has been asked whether internal administration of disinfectants may be appropriate for investigation or use as a treatment for coronavirus (SARS-CoV-2),” it wrote in an official statement on its website. Further adding, it said, “As a global leader in health and hygiene products, we must be clear that under no circumstance should our disinfectant products be administered into the human body (through injection, ingestion or any other route).”

Fearing that people might even consider the use of the cleaning products the company reiterated, "As with all products, our disinfectant and hygiene products should only be used as intended and in line with usage guidelines. Please read the label and safety information.” 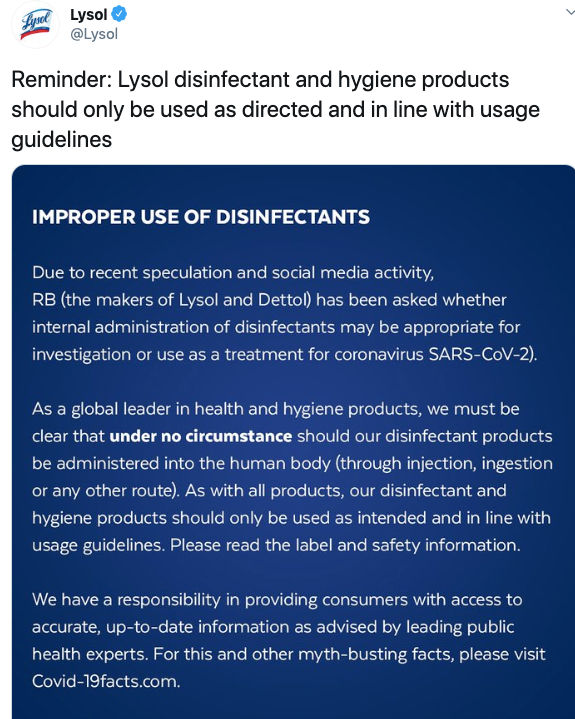 Food and Drug Administration chief Dr. Stephen Hahn was quoted saying on a leading US media TV show that as a health officer he would certainly not recommend the internal ingestion of the disinfectant. FDA reportedly warned the public earlier against “drinking bleach” saying that even inhaling fumes would cause irritation to the skin and under any circumstance wasn’t advisable.

Read: Number Of Coronavirus Deaths Climbs To Nearly 2,000 In Illinois

CDC sees a surge in calls

As of April 27, US Centers for Disease Control and Prevention reportedly said that it has already started to receive phone calls regarding consumption of cleaners and disinfectants. It added that there was a surge in such calls by at least 20 percent the first time in three months. Out of the many calls that it received, bleach consumption among other cleaners accounted for major percentage, according to reports. The CDC, however, emphasized that the use of bleach, soap, and other disinfectants was encouraged only to wash hands as it kills the virus on the body or surface. It recommended alcohol that kills 70 percent of viruses on surfaces only for external use.

Read: Trump's Focus On His Base Complicates Path To Reelection

PEOPLE HAVE PLEDGED SO FAR
LATEST NEWS
View all
4 hours ago
Brazil city starts drive-thru coronavirus testing
8 hours ago
Putin declines invitation from British PM to participate in Global Vaccine Summit
5 hours ago
Poland's postponed presidential election to be held June 28
5 hours ago
India, Bhutan sign MoU on environment cooperation
9 hours ago
Hong Kong leader says China will not back down on its new security law