Man Creates 'finger On A Stick' To Avoid Getting Infected From COVID-19, Netizens Amazed

Man said that he actually sat for over 30 minutes with the silicone cast on his hand and pigment to ensure that the fake finger worked as good as real.

A video of a start-up founder named Richard Skrubis using a 'finger on a stick' at the office optical scanner has astonished the internet. The man from Latvia posted a short clip on Twitter saying he was keeping himself safe from coronavirus because he had to visit the office and could not work from home. The users reminded him that he would have to disinfect the long stick and fake finger anyway. However, the CEO has now become an online sensation for his weird creation and the internet cannot stop talking about it.

Richard shared a 7-second clip where he can be seen touching the silicon finger on the biometry device that beeped and then beamed a green light in approval. He explained the procedure in multiple threads with a hashtag #FlattenTheCurve saying that he was keen on not touching any doors and surfaces as a precaution. He wrote in the post that he actually sat for over 30 minutes with the silicone cast on his hand and pigment to ensure that the fake finger worked as good as real.

I made a "finger on a stick", to curb touching my office entrance doors. #FlattenTheCurve pic.twitter.com/RF6kjHvqq2 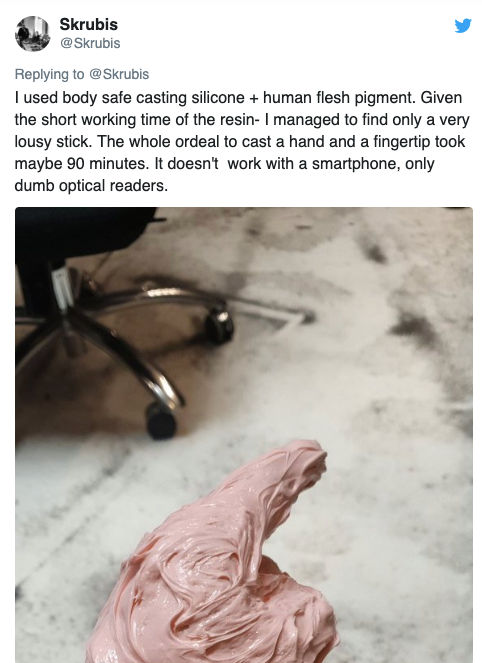 The video has gained over 81.7k views and 1.9k likes. Commenters shared jokes and memes asking retailers to “mass produce” the “pointless security”. “Nice, but do you have a robotic hand to grab the handle as well? “wrote a user. “Could I have your finger for a moment? I left mine inside,” wrote another. “Don't touch the finger on a stick,” wrote a third.

What material did you use to make this? Asking for a friend...

@LockPickingLwyr Just use a magnet !

And then your hand grab door handle... 👍

So that's what things would be like if I'd invented the fing-longer! pic.twitter.com/q8WvRiBmDW

OK, but why did you reaaallllly create it? 🤔

What's the reason for the extra silicone(?) hand? What does that accomplish?