Mexico Teen Finds $135k Cash In A Bag Next To ATM, Returns It To Police

Morals of a teen were put on test after he found a bag full of $1,35,000.  However, José Nuñez Romaniz, resident of New Mexico decided to choose the right path

Honesty is a virtue that has become rare in today's world. Recently, the morals of a teen were put on test after he found a bag full of $1,35,000.  However, José Nuñez Romaniz, a resident of New Mexico decided to choose the right path and decided against it keeping it.

According to reports, the 19-year-old found the bag outside an ATM and immediately dialled the emergency number written on the ATM. Later it was discovered that the bag belonged to Wells Fargo Bank in Albuquerque and was misplaced after a subcontractor left the bag outside, originally meant to fill the ATM.

The act did not go unnoticed and Romaniz was awarded $500 by the police department for his honesty. Along with that, he was also given an extra $500 and tickets to university football matches. The police department also took to Facebook to loud the honest lad.

Read: UK: Flatmates Enjoy Drinks And Barbecues While Being Stuck In Pub Amid Lockdown

The heroic post has impressed netizens and racked up over 2.3k likes and over 600 comments since posted. Netizens left no opportunity to laud the Romaniz. One wrote," How awesome. What an outstanding person of great integrity. We all need to strive to be just like him. Imagine that kind of world" while another wrote, " Thank you for setting an amazing example. Kudos to mom and dad for raising a good son! You're going far, kid."

"Helen Purser Such a great, honest, wonderful man. I'm sure his entire family is very proud of him. It's great knowing someone like him lives in our crime ridden town. I wish him all the luck in the universe, " read another comment. Another proud user wrote, Susan Trumbo-Forrer Awesome!! We need as many positive stories as possible- especially about hard working honest youth!! You made you family and community very proud!!" 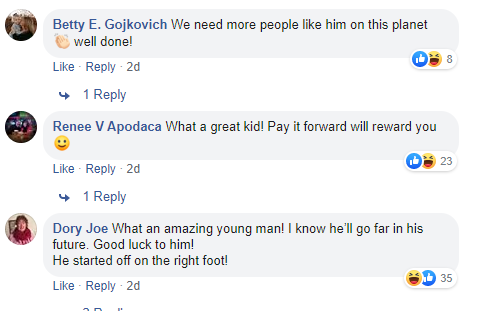 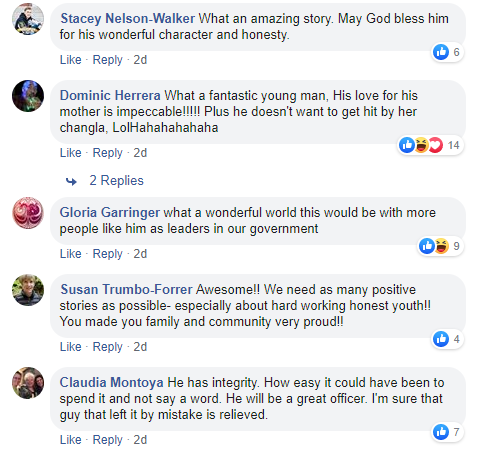 Read:  Delhi: Monkey Breaks Into ATM, Netizens Say It ‘must Be Short Of Money’