Minecraft's builders recreate 3 iconic places around the world including Taj Mahal in a 1:1 ratio. It was the project named ‘Build the Earth’. 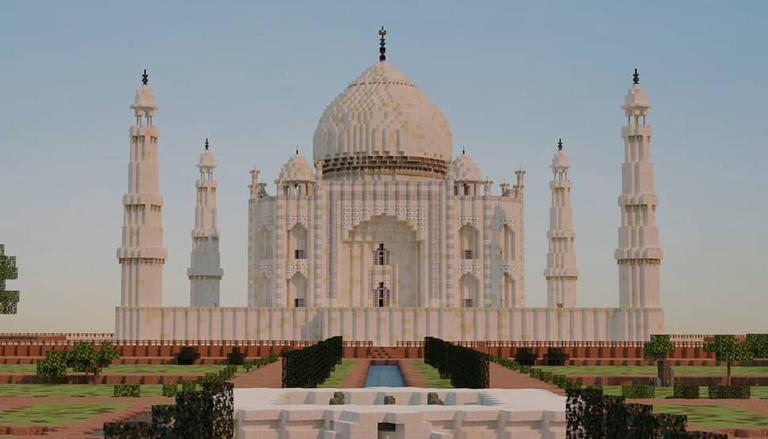 
Minecraft's builders recreate 3 iconic places around the world including Taj Mahal in a 1:1 ratio, as part of a project named ‘Build the Earth’ that started last year in March. People usually started with their home towns- buildings landmarks that they are familiar with such as the Statue of Liberty. Minecraft's website on the popular game Minecraft has 4237 ongoing build projects, which together cover about 6275 square kilometers.

The project named Build the Earth was started the last year March. In this project, Minecraft builders have recreated many world's most iconic landmarks and cities and have a mission to map the entire earth on the game 1:1 ratio. Taj Mahal is one of the seven wonders of the world which is considered the most beautiful and innovative creation across the world. Now, Taj Mahal has been celebrated as a Minecraft replica. From a Reddit post, it has gone viral that a project named Build on Earth is going to recreate the monuments on the popular game Minecraft and are on the mission to map the entire earth on a 1:1 ratio scale.

Due to the COVID-19, most of the people around the world are sitting inside the home while on the other hand YouTubers pippenFTS thinks of recreating this planet with its beautiful iconic places and cities on Minecraft's. Though it is a difficult task to map the entire planet on the game, many people had already started building the structure from shows of Game of Thrones, Disneyland, and their universities and school colleges campuses all through that game.

READ | How to make Pride Flags in Minecraft? Here's a guide to create Minecraft Pride Flags

Andrew Krung BTE representatives told local news tabloids “We saw an incredible response. People usually started with their hometowns—buildings that they are familiar with—or with famous landmarks such as the Statue of Liberty. But the best part about the project is that it allows people to see how amazing the planet is. To see the places you have seen in real life in the game—or, for that matter, the places you haven’t yet—is a surreal experience”

He Further added “According to their website, they have 4237 ongoing build projects, which together cover about 6275 square kilometers. While the progress they’ve made in the past year is huge, “in the grand scheme of things, it is barely anything. So far, cities like London and New York have been mapped almost entirely. For the other parts of the world, it is different: India has seen one of its first finished projects in the Taj Mahal.

Daniel Tan, the Minecraft builder said that Tajmahal is one of his favorite monuments in the world and it is one of the seven wonders of the world and iconic because it hadn’t been recreated in the project before September last year. He decided to take on it as his first Land project.

READ | How to make Concrete in Minecraft using Concrete powder and water?

"The process of recreating the white marbled monument and its entire compound was slightly complicated. The monument is not pictured perfectly on Google maps and has several distortions. I had to measure everything by myself to find out how big the complex and the buildings are,” says Tan

Other than Taj Mahal some parts of Mumbai, Bangalore, and Varanasi will also be recreated by Minecraft builders. Minecraft’s builders have built the famous Ambani Residence Antilia and they wanted to work on building landmarks like Gateway of India and Tajmahal Palace Hotel.

READ | Minecraft Sonic DLC: Sonic the Hedgehog is all set to arrive in the world of Minecraft

This project is huge, and is going to last several years,” adds Krug. “For that, we need more members from as many regions as possible so we can map the planet accuratel