On September 10, Anita Sengupta posted a tweet regarding the Chandrayaan-2’s Vikram lander which was circulated on social media. The former NASA engineer called Moon a planet in her tweet. Vikram lander has taken a toll on social media with unexpected reactions from the netizens, as it was unable to smoothly land on Moon’s lunar surface.

Moon is a planet?

Sengupta's tweet went viral for calling Moon a planet. Many netizens started to question her credibility as someone who has experience of 20 years in the aeronautics. Not only this, she an important point of contact in the launch of Curiosity rover, which was sent to Mars. Nevertheless, it was her reply to the so-called “mansplainers” which won hearts across the internet. She tweeted about the Chandrayaan mission saying:

It is too early to tell what happened to #Vikram yet, but landing on the surface of another planet is very hard to do the first time. What we learn from each engineering activity is how to improve, refine, and adapt.

Some netizens brought up the "mistake" Sengupta made in calling Moon a planet, “Agree with everything you said – proud of ISRO – but the moon isn’t a planet but a satellite,” read one of the numerous remarks on her post. But since she is an expert on the subject herself, there was no way she would ignore. She tweeted in response and her reaction went viral on social media. It quickly took the center stage. People reacted that science should not be gender discriminated.

And to all the mansplainers out there planetary EDL as a discipline covers airless body DL, our moon is an airless body. 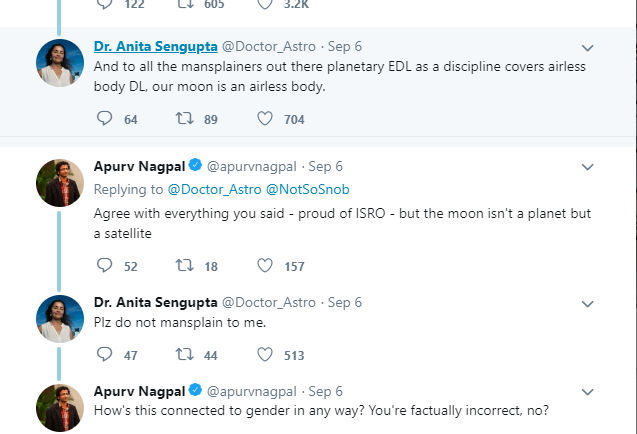 Who is a 'Mansplainer'

She was criticized for using the term ‘Mansplainer’ as that would initiate another gender war amidst the scientific facts. The term is precisely used when a man explains something to a woman in a typical way. It is usually while someone establishes patriarchy while leaving a patronizing and condescending remark. In order to be more accurate, she decided to share a flow chart for a better understanding of the term ‘mansplainer’.

B/c planetary EDL is an engineering discipline. Its #mansplaining bc you are not an engineer and I am expert. Here is a flow chart for you to follow in future. pic.twitter.com/82QWGFGanq