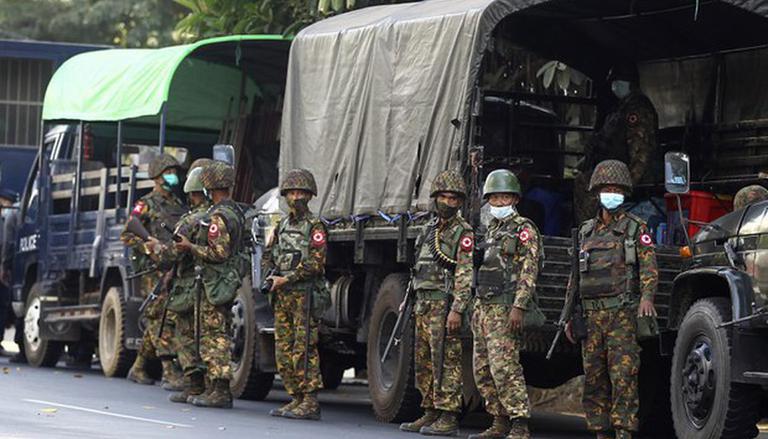 
Nearly 40 military junta troops were killed and at least 30 others were injured in one of the deadliest attacks in central Myanmar carried out by members of the resistance forces. Yaw (People's) Defence Force allegedly ambushed the military convoy of 50 vehicles in Gangaw Township, Magwe Region including armoured cars, with 14 landmines while it was travelling on the Gangaw-Pale Highway, Myanmar news outlet The Irrawaddy reported.

The civilian resistance fighters, however, managed to escape the scene, and later claimed that the junta forces opened fire with automatic weapons and grenades, a statement by the YDF revealed on Wednesday. The latter issued a document, appealing to the citizens to avoid using the Gangaw-Kale and Gangaw-Htilin highways due to the potential crossfire between junta troops and local people’s defence forces (PDF). The landmine attacks were carried out as the military convoy was passing from Kale Township in Sagaing Region to Gangaw. Two military vehicles sustained damages in the landmine attack, and the military suffered casualties, a civilian resistance fighter told The Irrawaddy.

The Tatmadaw's Lieutenant General Than Hlaing, the chief of the Myanmar Police and the junta’s Deputy Home Affairs Minister, was appointed on an urgent basis to take charge of operations against PDF in Sagaing and Magwe regions and Chin State, a former army captain who defected from the military after the February 1 coup told the Burmese news outlet. The region has been witnessing heightened tensions as the militia group, which was formed to resist the military following the February 1 coup, has been carrying out independent attacks on junta forces. Since last month, more than 1,100 junta troops have been the victim of violence.

Myanmar Junta’s spokesperson Major General Zaw Min Tun confirmed the reports of the military casualties in the state press, saying that convoy was attacked by resistance groups with landmines near Gangaw township. He added, that a few soldiers were injured, without giving out the actual numbers, according to RFA. The resistance fighters have attempted to block the strategic Gangaw-Kalay Highway in order to hinder the military presence.

"The Gangaw-Kalay Highway is a strategic route, and it would be difficult for the military if this road were cut off, they would have to send food and supplies by air,” a member of the YDF was quoted saying by RFA.

“When the rains are gone, they won't be able to use the waterways because the rivers will be dried up. So they need this road to go up into the mountains of Chin state," the member added.

Myanmar has turned into the hotbed of Junta-resistance standoff since the southeast Asian country’s military, led by senior General Ming Aung Hlaing, ousted the democratically elected government in a coup, and declared a state of emergency. Clashes between the Myanmar military and local resistance forces have intensified in the Yaw area of the Magway Region since the National Unity Government (NUG) declared war on the Junta regime.