Either the medical infrastructure of Myanmar has outstretched its capacity or people prefer not to trust the care of hospitals given the widely disliked govt. 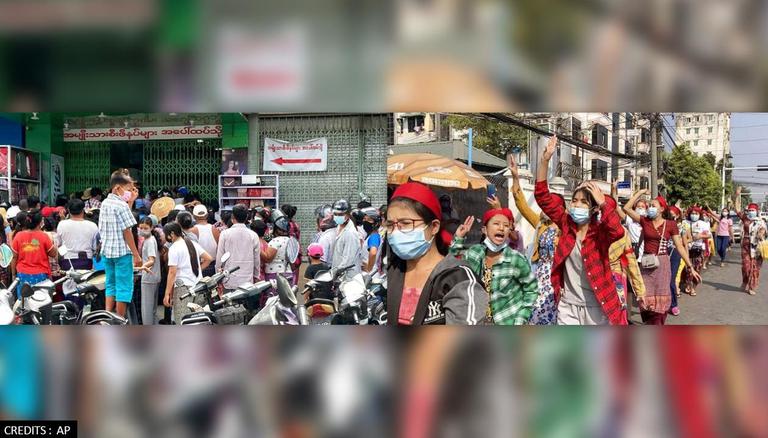 
Torn between a prolonged power crisis by the shift of political reigns in Myanmar since the military seized power in February 2021, the State has been slow to combat the devastating surge in COVID-19 cases since mid-May, 2021. As reports suggest, the complacency towards the pandemic has left plenty of ailing persons to suffer at home upon failure of securing a bed at military-operated-Army hospitals.

Under the ousted leader Aung San Suu Kyi, Myanmar had contained the deadly second-wave of the COVID-19 pandemic by imposing stringent curbs, such as restricting travels, sealing off Yangon, further curbing election campaigning in virus hot spots, and imposed lockdowns wherever required. While Suu Kyi was often seen on television with a stern and empathetic approach to the public on how to battle the situation, the vaccine quotas were secured from India and China. She was ousted less than a week after first jabs were given to health and para-medic workers. Medical workers spearheaded a popular civil disobedience movement that called on civil servants and other professionals to not cooperate with the strict military-led government during Suu Kyi's ouster.

Meanwhile, the doctors, medical practitioners, and nurses who boycotted the newly-self-imposed state system ran makeshift clinics, for which they were arrested or detained. The vaccination centres operated at a slow pace which led to infection explosion while military-operated hospitals were functional but persistently avoided by the majority.

"Under Suu Kyi, the government and volunteers worked together to control the disease, but it is difficult to predict what the future holds under military rule," founder of a civic action group told a news agency.

"No wise person with a good heart and sincere desire for truth would want to work under the junta's rule," he added.

Gritty images and news stories depict people queueing up to buy medical oxygen in the city of Kalay surfaced which showcased the reality of Myanmar's current healthcare infrastructure which is already on its knees. By the end of the week, residents of major cities in Myanmar also faced trouble in finding oxygen supplies too. The UN team has warned that a major outbreak of COVID-19 would have a devastating impact on Myanmar's economy and the health of its citizens.

Myanmar's new leader, Senior Gen, Min Aung Hlaing, on July 9, ordered oxygen plants to operate at full capacity, including converting industrial oxygen. This was followed up with an announcement that the government would drop all duties and licensing requisites for the import of oxygen concentrators.

On July 10, Myanmar's Health Ministry reported 4,377 new coronavirus cases for a total of 188,752 as well as 71 persons who succumbed to the virus. The death toll is extended to 3,756. About 3.5 million doses of COVID-19 vaccines have been administered to the country's 55 million persons i.e. 3.2 percent of the population would be fully vaccinated.

The Health Ministry announced that all schools would remain shut for the next two weeks and stay-at-home orders have been issued in cities while basic hospitals have been set up.

Amid the military’s violence, Myanmar citizens have also been facing an increasing shortage of cash and overall hikes in prices of goods and services as they are withdrawing their savings from banks due to concerns for their future, and economic woes. Kyodo News reported that the currency has been depreciating and the value of Myanmar’s currency Kyat dropped 14 percent just two months after the coup against the US dollar. As a result, the Southeast Asian country has been facing inflation on goods and products causing consumer prices to soar due to the currency crisis. In Myanmar's most populous city Yangon, people have been queuing outside the banks amid the ongoing financial crisis. Several bank employees have financial experts who have either stepped down or refused to conduct their duties in defiance of the junta regime.