The Anti-Corruption Commission accused the 75-year-old Nobel laureate Aung San Suu Kyi of having accepted illegal payments of gold and $600,000 in cash. 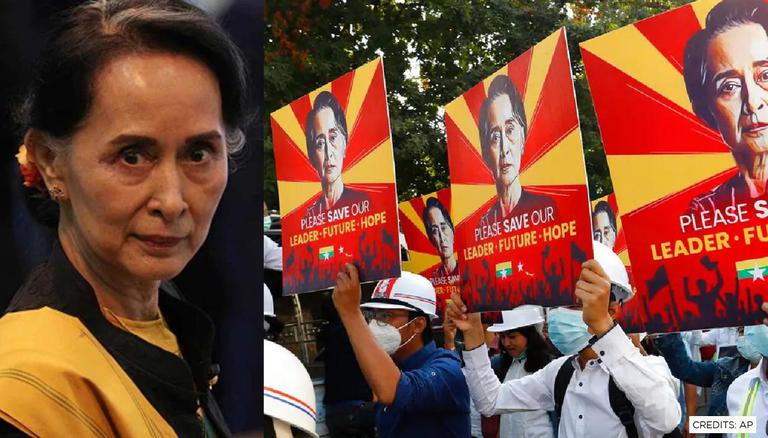 On June 14, four months since the military seized power in a coup, trial of Myanmar's ousted leader Aung San Suu Kyi and other leaders will commence and the junta court's first testimony will be out. The 1991 Nobel laureate, known for her non-violent struggle for democracy and human rights in Myanmar, is facing a battery of charges and expected to testify in person at a special court in the capital.

Myanmar's ousted leader and President Win Myint have been under detention since the military coup d'état earlier this year. They are being tried for allegedly violating COVID-19 protocols during last year's election. Also, the junta court is set to hear the matter in which Aung San Suu Kyi is charged for incitement and possessing unlicensed walkie-talkies.

On June 15, she will reappear before the court to face charges where she has been accused of breaching the Telecommunications Law and the National Disaster Management Law. Reportedly, the two leaders have been moved to an unknown location from their residences in the recent few weeks by the military which is also known as the Tatmadaw.

According to the head of her legal defence team, all allegations against her are baseless, so this can be categorised as the latest provocation by Myanmar's military rule to overthrow Aung San Suu Kyi from her glorious victory in November's national election. Her party had secured over 80 per cent of the seats while the military claimed that the polls were rigged. The junta later said it would conduct fresh elections only after two years and threatened to dissolve Suu Kyi's National League for Democracy (NLD).

The sixth charge against Myanmar's 75-year-old ousted leader Suu Kyi faces is the most serious one- breaching the colonial-era Official Secrets Act, which carries a penalty of up to 14 years' imprisonment. It has been handled separately from the other charges and was filed in a court in Yangon, the country's biggest city. Another of her lawyers had previously informed that when they met with her, she asked them if they could help pay for her food expenses because her cash resources were low and she did not want to rely on being fed by her captors.

As per Mayanmar daily The Global New Light, Kyi has been accused of:

Now, inside the country, she still remains widely revered as a symbol of democracy courtesy of Suu Kyi forming Myanmar's first form of civilian-led government in five decades in 2015.