Myanmar's Aung San Suu Kyi appeared at a specially convened court in the capital Naypyidaw in relation to the charges that she flouted the COVID-19 protocols. 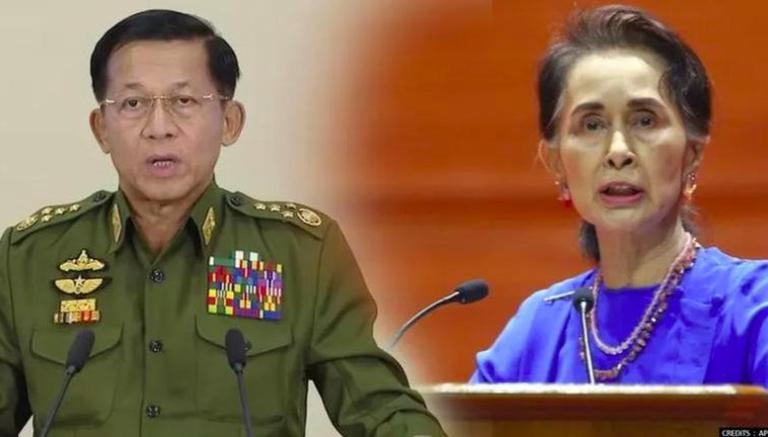 
Myanmar's ousted leader Aung San Suu Kyi on Monday asked the civilians to stay ‘united’ against the atrocities committed by the military Junta as she made an appearance in a junta court, her lawyer Min Min Soe told reporters. The 76-year-old Nobel Peace Prize laureate who was a democratically elected civilian leader of Myanmar was arbitrarily arrested on February 1 in a coup d'état carried out by Myanmar’s armed forces. Suu Kyi was hit with a raft of charges that could lead to more than a decade of imprisonment in case she is convicted.

On Tuesday, the ousted leader heard the testimony appearing at a specially convened court in the capital Naypyidaw in relation to the charges that she flouted the COVID-19 protocols after her National League for Democracy (NLD) had a landslide win last year 2020. The prosecutors also heard a separate charge of sedition. Both Aung San Suu Kyi and her detained Australian economist, Sean Turnell are among those who have also been charged with breaking Myanmar’s colonial-era official secrets law by the military Junta.

Additionally, three of Suu Kyi’s deposed cabinet ministers were also charged in a Yangon court under the same act.  Suu Kyi, Myanmar’s detained President Win Myint, and a senior NLD leader Myo Aung all three appeared in a court for a hearing on June 29.

Official secrets act case to be transferred to SC

The  Myanmar Supreme Court held a hearing last week to deliberate on the transfer of a case of official secrets against deposed leader from Yangon to the capital Naypyitaw, her defense team told Myanmar reporters and the state press. Former Myanmar President lawyer Khim Maung Zaw said that the ousted leader’s preliminary hearing on the violation of the Official Secrets Law is one of the most serious charges the military brought against her which could end her up in jail for up to14 years if proven guilty.

The court last week began the trial against the Suu Kyi on five different charges including inciting public agitation, violation of COVID-19 regulations, illegal importation of walkie-talkies, and the accusations made by the Anti-Corruption Commission of accepting bribes and the abuse of power, both of which were rejected by her lawyers in the court.