NATO called on Russia to “immediately de-escalate, pursue diplomatic channels, and abide by international commitments on transparency of military activities." 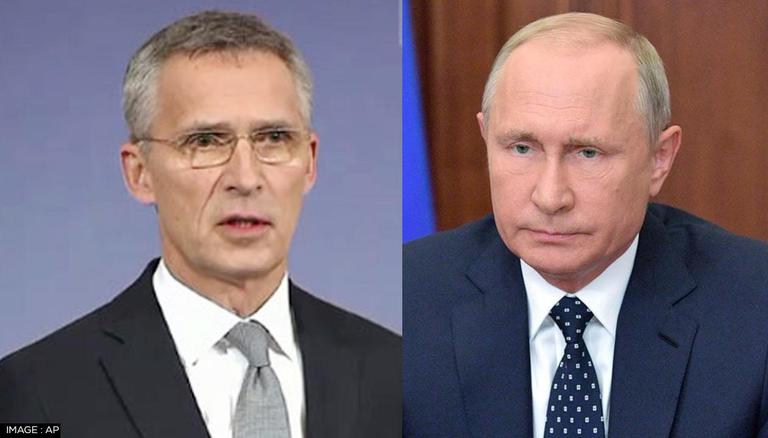 
North Atlantic Treaty Organization (NATO) alliance on Thursday, Dec. 16 said that it has received security proposals from Russia aimed at de-escalating tensions with the bloc, but that the bloc has its own security concerns that Moscow must respect, according to the Sputnik news. This comes after NATO expressed worry about the massive Russian troop buildup among the frontiers of Ukraine. "We are gravely concerned by the substantial, unprovoked, and unjustified Russian military build-up on the borders of Ukraine in recent months, and reject the false Russian claims of Ukrainian and NATO provocations," the Brussels-based alliance said in a statement, Thursday, as cited by Sputnik.

NATO welcomed the measures listed by Russia to subside the tensions with the bloc, as it said: "Should Russia take concrete steps to reduce tensions, we are prepared to work on strengthening confidence-building measures.” The alliance proposed that Russia must hold a dialogue via the Organization for Security and Cooperation in Europe (OSCE), which it stressed ”is also a relevant platform."

In its official statement, NATO said that it calls on Russia to “immediately de-escalate, pursue diplomatic channels, and abide by its international commitments on transparency of military activities.” NATO stressed that it was ready to hold a “meaningful dialogue” with Russia, emphasizing that it looks forward to the long-standing invitation to Russia for a meeting of the NATO-Russia Council. “We are aware of Russia’s recent European security proposals,” said NATO in its statement.

“We are clear that any dialogue with Russia would have to proceed on the basis of reciprocity,” the alliance asserted, adding that Russia must address NATO’s concerns about its actions. NATO further stressed that the dialogue between the two sides “must be based on the core principles and foundational documents of European security,” and shall be upheld with due consultation of NATO’s European Partners," according to the statement accessed by Sputnik.

In recent weeks, Russia bolstered its military “buildup" on the border with Ukraine that flared the fears of an invasion, NATO allies, and the US threatened retaliatory measures on Kremlin. Both US and UK warned economic sanctions on Russia worse than those imposed during Moscow’s annexation of Crimea.

Biden administration, meanwhile, mulled hitting Russia financially should Russian President Vladimir Putin launch a military offensive on Ukraine. Reports emerged that the US has been exploring options to respond to the Russian threat by slapping sanctions targeting Putin’s close associates that would cut Russia off from the global Belgium-based SWIFT financial system which moves payments across thousands of banks worldwide.

The US had earlier used SWIFT blockade threat to disconnect Iranian banks over Iran's nuclear enrichment programs that led to a massive loss of oil export revenue and a third of Tehran’s foreign trade, Maria Shagina, an expert on sanctions and energy politics affiliated with the Carnegie Moscow Center think tank told Associated Press.