Next Round Of 2+2 Dialogue Between India-US To Be Held In November: Foreign Secy Shringla

Foreign Secretary Harvardhan Shringla on September 3 said that the next round of 2+2 dialogue between India and the US would be held in November this year. 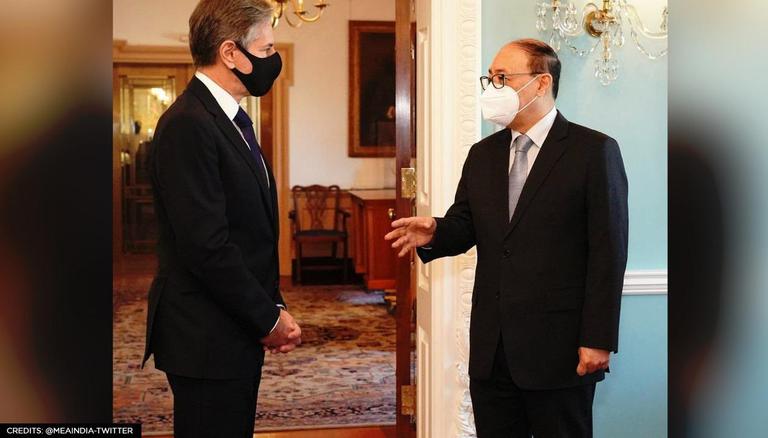 
Indian Foreign Secretary Harsh Vardhan Shringla on Friday, 3 September 2021, said that the next round of 2+2 ministerial dialogue between India and the US is expected to take place in November this year. According to PTI, Shringla told reporters, at the end of two days of meetings with US officials and business leaders, that the dates for the meeting are still being discussed. He also spoke of the tentative bilateral summit as he qualified it as something under discussion.

“We're looking at the 2+2 which will happen in November. The exact dates are not yet worked out,” Shringla said.

The last meeting of 2+2 was held in New Delhi, therefore, now, it’s the US’ turn to host the annual meeting of the foreign and defence ministers of the two countries. External Affairs Minister S Jaishankar and Defence Minister Rajnath Singh would be hosted by their American counterparts, Secretary of State Antony Blinken and Defence Secretary Lloyd Austin. It is worth noting that all four leaders have had in-person meetings before.

Meanwhile, Shringla has concluded his three-day visit to Washington DC wherein he held meetings with top officials of President Joe Biden’s administration, including Secretary of State Antony Blinken. During his trip, the Foreign Secretary discussed the Afghanistan situation. The two nations also had extensive conversations on regional and multilateral issues including the UN and the upcoming Quadrilateral summit later this year.

According to PTI, Shangrila also held meetings with industry representatives organised separately by the US India Strategic and Partnership Forum and US India Business Council. “We covered a very wide range of issues of interest to them,” the foreign secretary said. He added that they were very interested in India's handling of the COVID-19 situation, the vaccine issue, economic recovery in India, economic opportunities and the investment situation in the country.

On 1 September, India and the US held a bilateral 2+2 inter-sessional dialogue in Washington DC. The meeting saw several discussions regarding the last Ministerial Dialogue which took place in October 2020 and regarding the preparations for the forthcoming dialogue later this year. The Indian and US delegations were led by many eminent personalities from the ministry. During the meeting, both sides took stock of the India-US partnership and all the different priorities to be focused on.