In a wholesome video, laureate David W.C. Macmillan was greeted enthusiastically by his students and colleagues after he won the 2021 Nobel Prize in Chemistry. 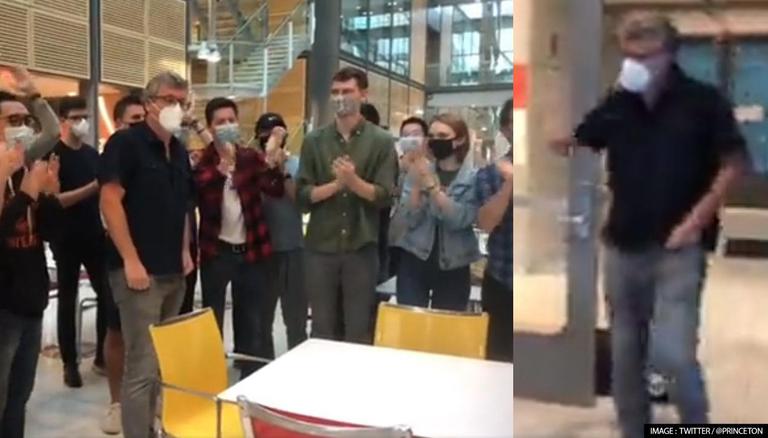 
In a wholesome video, laureate David W.C. Macmillan was greeted enthusiastically by his students and colleagues after he won the 2021 Nobel Prize in Chemistry on Wednesday, 6 October.  The Royal Swedish Academy of Sciences has announced that the Nobel Prize in chemistry 2021 was jointly awarded to Benjamin List and Macmillan “for the development of asymmetrical organocatalysis.” From Princeton University in the United States, Macmillan has also said that “catalysis is incredible.”

Welcome to the #NobelPrize family - enjoy the celebrations! https://t.co/UMCptMEI8o

Watch this video with our new #NobelPrize laureate David MacMillan to learn more about his work. https://t.co/gYzi1Lplub

Similar to how Macmillan was greeted by his students and colleagues, the List lab also shared a video of exhilarated members who cheered for the newest Nobel laureate. The official account of the Nobel Prize reshared the video congratulating List from Max-Planck-Institut für Kohlenforschung, Mülheim an der Ruhr, Germany.

New chemistry laureate Benjamin List sent us this selfie of him and his wife Dr Sabine List on holiday right after they found out the news about his #NobelPrize.

Stay tuned for our interview with him coming soon! pic.twitter.com/lkWNz0B2iP

Royal Swedish Academy of Sciences has said that Benjamin LIst and David MacMillan are awarded the Nobel Prize in Chemistry “for their development of a precise new tool for molecular construction: organocatalysis” which “had a great impact on pharmaceutical research, and has made chemistry greener.”

While researchers, for the longest time believed that there are just two types of catalysts, metals and enzymes, List and MacMillan separately developed a third type of catalysis. It is called asymmetric organocatalysis and builds upon smaller organic molecules. Johan Åqvist, who is chair of the Nobel Committee for Chemistry, said in a statement, “This concept for catalysis is as simple as it is ingenious, and the fact is that many people have wondered why we didn’t think of it earlier.”

BREAKING NEWS:
The 2021 #NobelPrize in Chemistry has been awarded to Benjamin List and David W.C. MacMillan “for the development of asymmetric organocatalysis.” pic.twitter.com/SzTJ2Chtge

The academy explained in its statement that organic catalysts have a stable framework of carbon atoms that allows more active chemical groups to attach. These mostly contain common elements such as oxygen, nitrogen, sulphur or phosphorus meaning that these catalysts are both environmentally friendly and can be produced at low cost. The Nobel Prize academy has said that the rapid expansion in the usage of organic catalysts is primarily due to their ability to drive asymmetric catalysis.

READ | Nobel Prize 2021 in Chemistry: What is 'organocatalysis' which won the laurel?

"When molecules are being built, situations often occur where two different molecules can form, which – just like our hands – are each other’s mirror image. Chemists will often only want one of these, particularly when producing pharmaceuticals,” the academy explained.

“Organocatalysis has developed at an astounding speed since 2000,” it added.