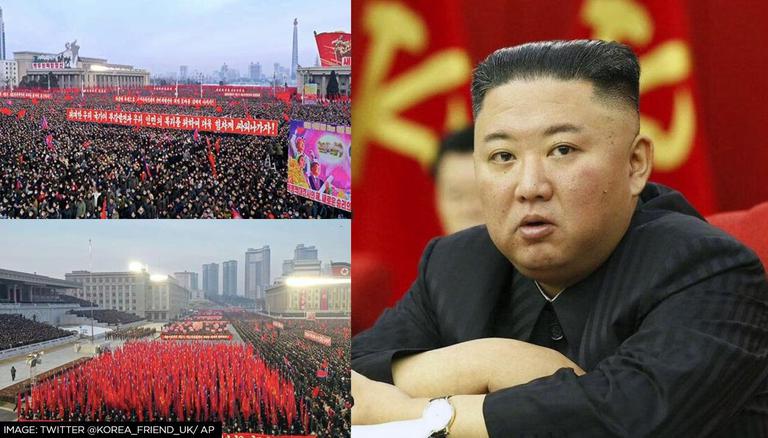 
Thousands of North Koreans on Jan. 8 converged in a rally to pledge their support for the communist regime’s autocratic Kim Jong Un to build an invincible military and expand it to deter the foreign threats. Among those that rallied statewide were the factory and office workers, farmers and students, as well as the citizens from all walks of life in the pariah state. Donning the face masks and adhering to the health and safety measures as North Korea is battling severe pandemic woes, the DPRK citizens assembled in Pyongyang's Kim Il-sung square to show their support for the nation’s military and their leader Kim Jong Un, according to several reports.

Pyongyang City Rally
A Pyongyang city rally took place at Kim Il Sung Square Wednesday to vow to carry through the decisions of the 4th Plenary Meeting of the 8th Central Committee of the Workers' Party of Korea (WPK). pic.twitter.com/FW8dyAqFlY

Themed as ‘unity' for the regime,’ the rally witnessed a huge crowd that chanted messages supportive regime’s Workers' Party Congress and its decisions of ramping up the defense forces. At the key political conference, Kim vowed to upgrade the military capability, maintain tough anti-virus measures and improve the country’s battered economy during his speech, reported Korean media. At the five-day plenary meeting of the ruling Workers' Party, though, Kim did not mention the sour relations with the United States and South Korea, to whom he recently refused a dialogue on an official memorandum on ending the Korean War.

Kim has no interest in resuming talks, experts weighed in, stressing that he instead has plans of bolstering the military despite international sanctions to fight against what he labels external threats. The autocratic North Korean leader ordered to increase the production of more powerful, sophisticated weapons systems and strengthen military forces.

READ | North Korea targets US over Beijing Olympics boycott, calls it 'insult to spirit' of games

"The increasingly unstable military environment on the Korean Peninsula and international politics have instigated calls to vigorously push forward with our national defense build-up plans without any delay," Kim was quoted earlier as saying in his speech by the official Korean Central News Agency.

He also called for DPRK military's "absolute loyalty and allegiance" to the ruling party led by him, as per a KCN report.