NSA Ajit Doval visited Moscow on Wednesday at the invitation of Secretary of the Russian National Security Council and discussed regional cooperation.

NSA Ajit Doval visited Moscow on Wednesday at the invitation of Nikolai Patrushev, Secretary of the Russian National Security Council and discussed regional cooperation. NSA’s talks with his Russian counterpart covered preparations for Prime Minister Narendra Modi's visit to Vladivostok for the Eastern Economic Forum in early September, bilateral cooperation between the two National Security Councils as well as regional and international issues.

The statement issues by the MHA on NSA's visit said that both sides reaffirmed their intention to intensify counter terrorism cooperation. "The longstanding position of both sides on importance of their bilateral consultations and mutual support for principles of sovereignty and territorial integrity and non-interference of third parties was reiterated," the statement mentioned.

The statement further highlighted that discussions were based on 'mutual trust and confidence' and showed 'identical or close positions' on various issues characteristic of the Special and Privileged Strategic partnership between the two countries.

The NSA also met Director of ROSCOSMOS Dmitry Rogozin to review ongoing cooperation in the space field and the Gaganyaan programme. Rogozin applauded the progress of the Chandrayaan programme and conveyed Russia’s support and best wishes for the Mission’s success. Both sides also discussed long term aspects of space cooperation, which is expected to figure prominently in the Bilateral summit in Vladivostok.

Here is the picuture of NSA Ajit Doval with Russian counterpart: 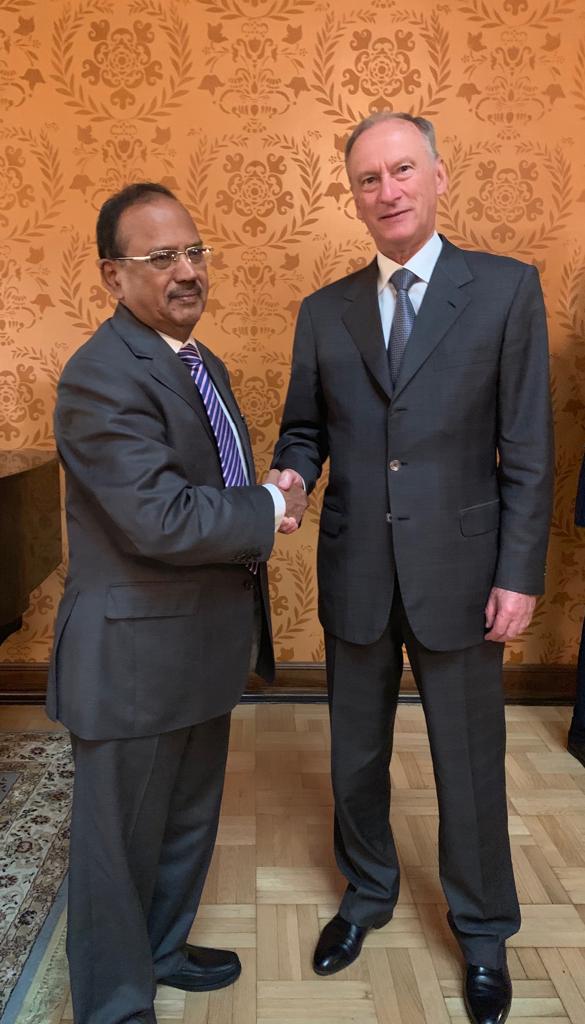 Even as Pakistan kept urging the international players to intervene in India's step to abrogate Article 370, thereby integrating Jammu and Kashmir, UN Security Council on Friday just held a rare closed door meeting to discuss the matter. After Pakistan's repeated begging to China which is a permanent member in the UNSC, China requested UN to have a "closed consultations" on the issue. However the meeting is informal in nature and the outcome of the UNSC meeting will not be a formal pronouncement as the consultations are informal in nature. The deliberations began at 10 am (7:30pm IST) in the Security Council Consultations Room.

What Russia said on Kashmir before UNSC closed-door meet?

Russia's deputy permanent representative, Dimitry Polyanskiy told reporters before entering the meeting room that Moscow's view is that it is a "bilateral issue" between India and Pakistan. He said the meeting was being held to understand what is happening. "That's what closed consultations are for. What does Russia think the next step should be- we favour bilateral track between india and Pakistan. You know our position. It hasn't changed. Today we have closed consultations and we will just exchange opinions and see what we can do and what we cannot do. It is a normal process."

When asked if Russia was concerned over the tense situation between India and Pakistan, Polyanskiy said, "we are very much concerned. We hope to avoid it. Asked if the Council can play a useful role, he replied, "We first need to discuss and then we'll see." Replying to another question, he said, "sometimes it is better not to touch upon such an issue. It's a bilateral issue," the Russian diplomat said.