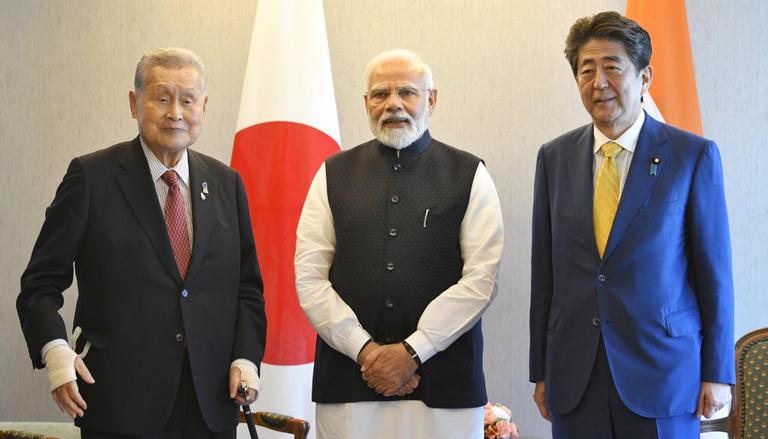 
PM Modi met former Japanese Prime Ministers Yoshiro Mori and Shinzo Abe and appreciated the role played by the Japan-India Association (JIA) in enhancing relations between the two nations. Mori is the current president of the JIA. PM Modi is in Japan to attend the QUAD summit and bilateral meetings with Japanese PM Fumio Kishida and other leaders.

Prime Minister Narendra Modi on May 24 attended the bilateral meeting with his Japanese counterpart Kishida. The delegations from both countries met after the completion of the QUAD Summit. Mosi had earlier said that India and Japan are 'natural partners' and also acknowledged the contribution of the nation to India's developmental journey.

Met former PMs @AbeShinzo and Yoshiro Mori. We had wonderful discussions on various topics. The Japan-India association is playing a commendable role in boosting ties between our nations. pic.twitter.com/sBcNTOPguP

Among many other projects, Japan also contributing to one of the most ambitious hi-speed rail undertakings in India - the  508.17 km Mumbai-Ahmedabad bullet train project. The Japanese side has confirmed the high-speed Shinkansen trains will be customised for Indian conditions including temperature, dust and weight before they are sent to India for the country's ambitious 'bullet train project'.

Earlier during the QUAD summit, Australia, USA, India and Japan declared they will invest $50 billion in infrastructure projects in the Asia-Pacific region.

"In the infrastructure sector, we announce that we will aim to invest more than $50 billion over the next five years to assist projects in the Indo-Pacific region," informed Japanese PM Fumio Kishida.

He also appreciated India's efforts to provide vaccines to Cambodia and Thailand under the QUAD arrangement. India had also launched the 'Vaccine Maitri' initiative when Covid-19 peaked in 2021, under which New Delhi delivered over 45.6 million doses of ‘Made in India’ jabs to as many as 45 countries across the world including Bhutan, Maldives, Bangladesh, Nepal, Myanmar and Seychelles. Of these, 7.12 million were generous donations.

After the completion of the QUAD Summit, a joint statement was issued wherein the leaders renewed their steadfast commitment to a free and open Indo-Pacific in connection with certain issues like - peace and stability, climate change, maritime domain awareness, COVID-19, cybersecurity etc.