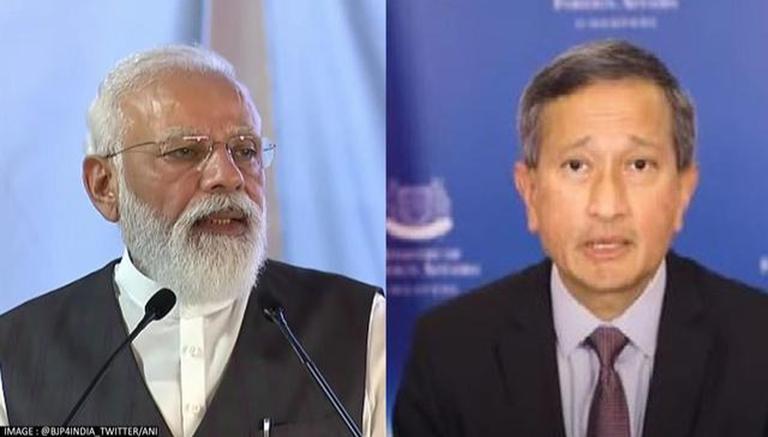 
Hailing the Ayushman Bharat Digital Mission, Singapore Foreign Minister Vivian Balakrishnan on Wednesday said that the crucial steps taken by India would help in improving the lives of lakhs of common people. While speaking at the inaugural session of the Indo-ASEAN Business Summit, Balakrishnan termed the recent launch an "excellent example" of how digitalisation can help improve people's lives. India's Prime Minister Narendra Modi launched the Ayushman Bharat Digital Mission on September 27. During the launch, PM Modi said that the revolution would connect common people and poor patients with hospitals across the nation.

Meanwhile, during his speech, the top Singapore diplomat noted that there has been a tremendous acceleration of digitalisation amid the COVID-19 pandemic. "India's Ayushman Bharat digital Health ID launched by Prime Minister Narendra Modi just last week is an excellent example of how digitalisation can help improve people's lives," he said. It is worth mentioning that the recent launch by the Indian Prime Minister would ensure a unique health ID for every citizen. The unique medical card would also work as a health account to which personal health records can be linked.

While speaking about the surge in trade between India and the Association of Southeast Asian Nations (ASEAN), Balakrishnan said that the regional bloc and India remain dedicated to improving ASEAN centrality and to "foster an open and comprehensive provincial structure". Unveiling the plans of Singapore, the top diplomat said that the country believes in strengthing bilateral ties by investing in both big and small business establishments. "We look forward to India's increased engagement with ASEAN under its Act East Policy and expanding innovative new areas of collaboration," he added. "Since we established ASEAN and India free trade area in 2010, trade has almost doubled to USD 77 billion in 2019. Even in the phase of COVID-19, India and ASEAN have worked together to maintain supply chains and facilitate the flow of the essentials," the Singapore Foreign Minister stated.

According to the digital health mission, it would create interoperability within the digital health ecosystem, similar to the role played by the Unified Payments Interface (UPI) in revolutionising payments. Notably, the mission was appreciated by several international business tycoons including Microsoft co-founder Bill Gates. Taking to Twitter, Gates congratulated PM Modi and said that the digital health infrastructure will help ensure equitable and accessible healthcare delivery and accelerate progress on India’s health goals. In reply to Gates' tweet, PM Modi thanked the entrepreneur for his kind words on the Ayushman Bharat Digital Mission.