President Ram Nath Kovind met with his counterpart and Bangladeshi President Abdul Hamid on the first day of his visit to celebrate 50 years of the 1971 war. 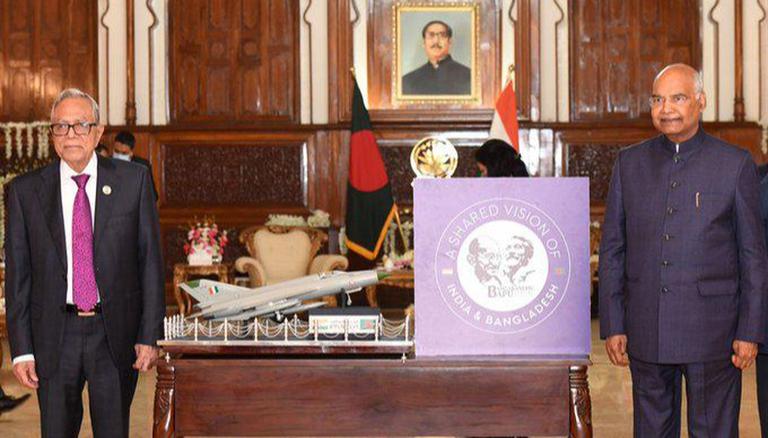 
President Ram Nath Kovind is on a three-day visit to India's neighbour Bangladesh, starting December 15, to celebrate the  Golden Jubilee of Bangladesh's liberation from Pakistan in 1971. President Kovind has been invited to Bangladesh as the "guest of honour" for the 'Victory Day' event that will be held on December 16. After he landed in Bangladesh on Wednesday, President Kovind was welcomed with a 21-gun salute and a guard of honour.

President Kovind met with his Bangladeshi counterpart Abdul Hamid at Bangabhaban Presidential palace on Day 1 of his visit and gifted something that reflected the spirit of the 1971 Bangladesh liberation war. Hamid received a replica of the 1971-era MIG 21 aircraft which was used in the war to make the Pakistanis surrender. In a tweet from the President's office, it was revealed that an aircraft of the same model has been installed at the Bangladesh National Museum, which is also a gift from India.

President Ram Nath Kovind presented a replica of 1971-era MIG 21 aircraft to President Abdul Hamid of Bangladesh. An aircraft of the same model gifted by India to Bangladesh has been installed at Bangladesh National Museum. pic.twitter.com/ca7b2G4qIa

The meeting also was productive in the sense that both the representatives held delegation-level talks and discussed issues such as connectivity and trade, cooperation in the fight against COVID-19, and matters concerning development partnerships. Apart from a meeting with Hamid, President Kovind also exchanged dialogues with Bangladesh Prime Minister Sheikh Hasina.

In a meeting of high significance, Indian President Ram Nath Kovind and Bangladeshi PM Sheikh Hasina discussed bilateral ties along with recalling their victorious past. In addition to this, both the leaders also expressed their satisfaction over the joint celebration of 'Maitri Diwas', as per the spokesperson for the Ministry of External Affairs, Arindam Bagchi.

The two leaders also recalled the spirit of 1971 Liberation War and expressed satisfaction at the joint celebration of #MaitriDiwas. pic.twitter.com/SW0rIKnKCR

The President's first day and the schedule ahead

Prior to meeting Hamid and Hasina, President Kovind placed wreaths in memory of Bangladesh's martyrs from the war and visited the Bangabandhu Sheikh Mujibur Rahman Memorial Museum to pay homage to Bangladesh's founding father Sheikh Mujibur Rahman. On Thursday, December 16, which will be President Kovind's second day, he will attend the Victory Day parade at the National Parade Ground as a "guest of honour". In the afternoon of the same day, he is scheduled to attend a function titled "Great Victory Heroes", which is organised in memory of Sheikh Mujibur Rahman, in the South Plaza of the Jatiya Sangsad Bhaban. On his third and final day, President Kovind will inaugurate and inspect the newly renovated section of Kali Temple at Ramna at the central part of the capital and leave on the afternoon of December 17.