Prince Charles acknowledged the Caribbean island's 'appalling atrocity of slavery,' in his speech during a ceremony commemorating Barbados' historic transition. 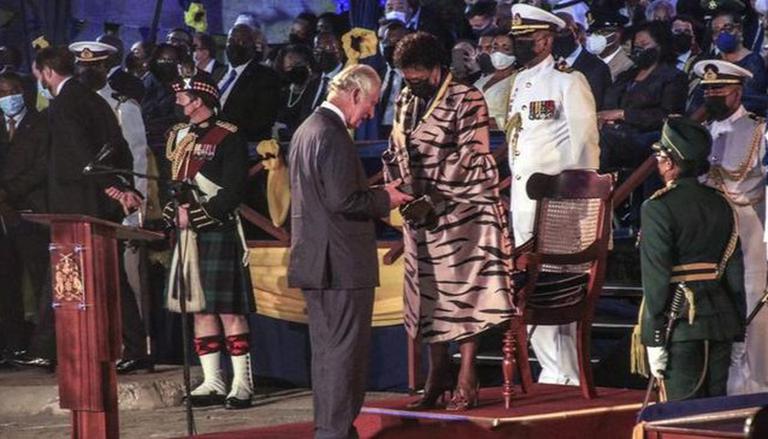 
Prince Charles acknowledged the Caribbean island's "appalling atrocity of slavery," in his speech during a ceremony commemorating Barbados' historic transition to a republic. The Royal Standard was lowered for the final time in Barbados on Tuesday, as the Queen was replaced as head of state. While delivering his speech, Charles called the period when the UK was a major player in the transatlantic slave trade the "darkest days of our past," but said that the creation of this republic offers a new beginning.

"The creation of this republic offers a new beginning, but it also marks a point on a continuum, a milestone on the long road you have not only travelled but which you have built," the heir to the throne said exactly 55 years after Barbados gained independence from Britain - 396 years after it became part of the British Empire.

Charles witnessed the symbolic moment when the Queen's standard was lowered and the presidential flag was raised in its place. The Queen had earlier sent her congratulations to the island's new president, the former Governor-General, and said the island had a special place in her heart.

"From the darkest days of our past, and the appalling atrocity of slavery, which forever stains our history, the people of this island forged their path with extraordinary fortitude. Freedom, justice and self-determination have been your guides,” said Prince Charles adding that he will always consider himself a friend of Barbados.

His words echoed a speech he gave in 2018 during a tour of West Africa, in which, after visiting a site in Ghana where Africans were shipped to a life of slavery, he described the slave trade as an indelible stain on the world. Prince Charles' presence at the ceremony demonstrates Britain's desire to maintain strong ties with the island, which will remain a member of the Commonwealth, which Charles will one day lead as its leader.

READ | Barbados to become first sovereign nation to have embassy in metaverse: Report

The country's first president, Dame Sandra, was then sworn in. The president presented Charles with the Order of Freedom of Barbados, the country's highest honour, following his speech. Despite the island's history of slavery, there is still respect for the monarchy and Britain in general, particularly among the island's older population. Barbados was claimed by the British in the 17th century and turned into a profitable colony thanks to the labour of hundreds of thousands of African slaves brought over as slaves. Mia Mottley is one of the Caribbean leaders who has advocated for reparations to the island as a result of the slave trade.

READ | Barbados gets first President as it becomes Republic; replaces Queen as head of state